Musk To Ad Industry: We Need To Improve The Signal-To-Noise Ratio 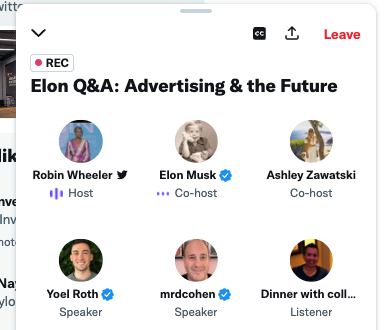 At a time when one of the biggest issues across the advertising industry is becoming the ability to authenticate and understand the identity of people reached through media, Elon Musk Tuesday made a strong case for how Twitter’s new verification subscription model will do that.

Speaking during a Q&A on the “Future & Advertising” on Twitter Spaces midday Tuesday, Musk reiterated why his plan to begin charging Twitter users $8 a month to have their accounts verified with the platform’s blue checkmarks, which is something that many veteran users have objected to some of the most critical press coverage has focused on during his first couple of weeks as Twitter’s new owner.

But listening to Musk explain it, the idea is less to do with generating a secondary subscription revenue stream for Twitter, as it is for utilizing a market-based approach for weeding bots, troll farms and other bad actors, while simultaneously boosting the relevance of verified users who are good actors.

Importantly, Musk told the ad community that in addition to paying $8 monthly, each of those accounts must be associated with a credit card and a phone number, which are levels of authentication that have enabled a wide range of transactional services platforms – everything from Uber to Airbnb to Instacart – to function securely and with far less friction than platforms without those levels of authentication.

“There’s hundreds of millions of fake accounts that are created every year at Twitter. Most of them are blocked, but not all of them,” Musk explained, adding, “The issue is that creating a fake account is just extremely cheap. It’s maybe a tenth of a penny or just some very small amount of money. By charging $8 a month it raises the cost of a bot or troll by somewhere between a thousand and ten thousand.”

Or as Twitter head of safety and integrity Yoel Roth added during the session, “Our goal is is to try and change the cost/benefit calculus for some of those bad actors.”

While Musk was explicitly talking about the authentication problems that have plagued Twitter, he described the solution as "an information problem" that could be solved in a similar way by other platforms, as well as for advertisers coming at a time when they are simultaneously losing many of the consumer identity signals -- third-party browser cookies, devices IDs, etc. -- that they've been using to target and authenticate consumers in their media buys.

"Truth is a signal and falsehood is noise," Musk asserted, adding, "And we want to improve the signal-to-noise ratio as much as possible."

Musk added that rival social media platforms could also fix their authentication problems by moving to user verification subscription models, which would improve the authenticity and relevance of what their users post, as well as the brand safety of that content for advertisers to be adjacent to or associated with.

During the session, Musk said Twitter is also moving fast to improve the relevancy of ads served to Twitter users by fixing some legacy software issues. Among other things, he said Twitter has had three different "software engines" including separate ones for the relevancy of ads vs. users content, and that one of his first acts as Twitter's new owner was to consolidate its software teams into one integrated unit.

"We need to have them be the same software stack," he said.

Musk also spoke about the need to improve Twitter's ad targeting in other ways to ensure that users are only seeing the most relevant ads in their Twitter feeds.

Musk reassured Madison Avenue that Twitter has not changed either its content moderation polices or enforcement, and said Twitter is in the early stages of creating a new Content Moderation Council drawn from a cross-section of outside advisors representing diverse points-of-view.

1 comment about "Musk To Ad Industry: We Need To Improve The Signal-To-Noise Ratio".
Check to receive email when comments are posted.
Next story loading