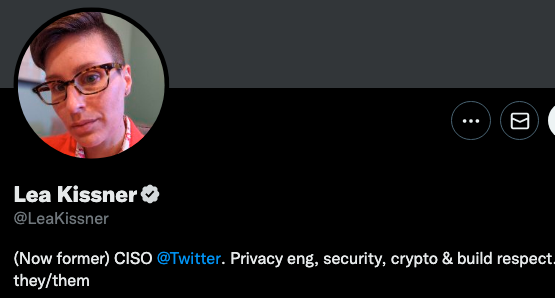 Twitter’s most senior cybersecurity executive Lea Kissner departed the social platform on Thursday, alongside other key privacy and compliance staffers -- a concerning development that may cost the company billions in fines from the FTC.

In the past two weeks, with billionaire Elon Musk at Twitter’s helm, half of the company has been laid off, along with the forceful removal of senior executives including CEO Parag Agrawal, general counsel Sean Edgett and legal policy chief Vijaya Gadde.

Along with Kissner’s resignation -- which he announced via tweet, calling it a “hard decision,” but not citing specific reasons -- comes news of more Wednesday departures, including Twitter’s chief compliance officer Marianne Fogarty and chief privacy officer Damien Kieran, according to journalist Casey Newton.

With continued high-level departures, it remains unclear who is carrying out these important roles at the company, such as tracking harmful activity on the platform, and ensuring that Twitter is reporting information and following proper compliance measures.

Washington Post reporter Cat Zakrzewski tweeted a quote from an FTC spokesperson: “We are tracking recent developments at Twitter with deep concern. No CEO or company is above the law, and companies must follow our consent decrees. Our revised consent order gives us new tools to ensure compliance, and we are prepared to use them.”

The FTC reached a settlement with Twitter in May, demanding $150 million in fines, after the company was caught using personal user info to target ads. Then, in August, the company addressed a security breach in which hackers collected the information of 5.4 million Twitter accounts.

According to a Twitter employee, this week’s launch of the revamped Twitter Blue subscription went around the company’s privacy and security review, continuing after disregarding useful internal recommendations.

If Twitter refuses to comply with the FTC’s current warnings, they could face fines into the billions of dollars, according to a company lawyer who is encouraging employees to seek whistleblower protection.