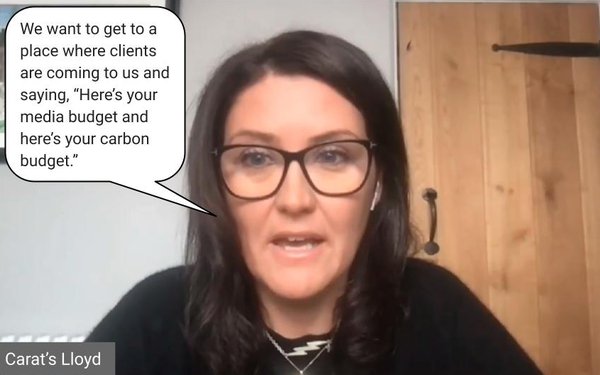 A week after Dentsu unveiled plans to integrate carbon alongside metrics like reach and frequency into its media-planning system, one of its top executives told a global ad industry audience that it wants to get to the point where clients allocate explicit “carbon budgets” alongside the ad budgets it spends on media for them.

“We want to get to a place in where, as media agencies, clients are coming to us and saying, ‘Here’s your media budget and here’s your carbon budget'," Fiona Lloyd, global client and brand president of Dentsu’s Carat unit, said Tuesday during a panel discussion at the Ad Net Zero Global Summit about the role media planning can play in the decarbonization of advertising.

“Our job, at that planning stage, will be how do we synthesize the media budget and deliver on all the communications objectives that the client needs us to -- and deliver the performance within the campaign -- within a defined client carbon budget,” she said, adding: “When every media agency in every brief that’s going in, has a carbon budget and a media budget, then we’re having real impact at scale.”

Lloyd’s comments illustrate how far the science of media planning has begun to incorporate the science of climate change, which is the core objective of the Ad Net Zero initiative overall, including reducing the entire carbon footprint of advertising -- from the creation, production and distribution of ads to the media agencies buy to reach consumers with them.

While much of the summit focused on the creative and production processes, the media-planning panel demonstrated that some of the world’s biggest agencies are making strides in incorporating carbon into their planning and buying systems -- not just to make the media they buy more carbon neutral, but to actually reduce the amount of carbon they generate.

Most big agencies and their clients have adopted at least some form of a carbon strategy, and Ad Net Zero has emerged as an organizing forum for accelerating -- and perhaps just as importantly, unifying it -- including creating industry standards for the calculators agencies and advertisers use to estimate the carbon footprint of various media suppliers and channels.

GroupM especially, has been pushing for that, and has already pledged to share one it created that doesn’t just estimate the carbon impact of digital media, but of all media, in order to have a common yard stick, or as the case may be, meter stick.

“I think the way that we best accomplish exactly those wonderful ideals that we’re all sharing and very spiritually aligned on, is to have a common way that we count,” GroupM Global Head of Partnerships Kieley Taylor said in response to Dentsu’s Lloyd’s comments on the panel, adding: “So that the budget is counted the same way, so that when Nestle has different agencies around the world they’re not getting different answers… whether we are using a meter stick or a yard stick.”

Taylor referenced Nestle, because a third member of the panel was Nestle Media Lead Laure-Sarah Labrunie, who presented examples of simple steps the global packaged goods giant already is taking to reduce the carbon impact of ads running in various media.

Several speakers during other sessions at the Ad Net Zero summit gave shoutouts to GroupM, as well as Mindshare, for sharing its calculator and making its methods for understanding the impact of media on carbon open source for all in the industry to use.

On Thursday, GroupM also unveiled a new “Client Coalition” comprised of 20 of its largest clients and invited the clients of other agencies to join it to act as a collective force and help standardize the way the ad industry works with and leverages the media supply chain in order to have an impact.