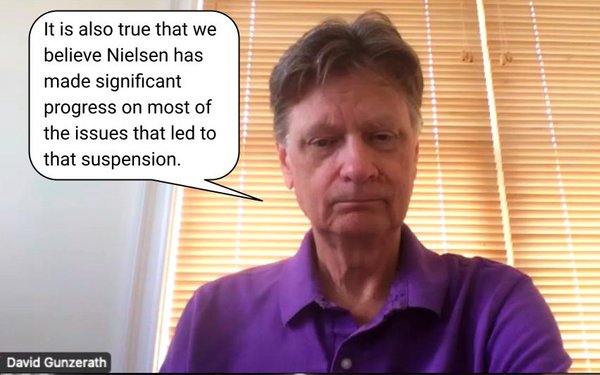 Nielsen has made "significant progress" in bringing its national TV ratings service up to its accreditation standards, but the Media Rating Council's audit committee has voted to continue its suspension.

The MRC originally suspended Nielsen's national TV service, as well as its local TV ratings, in September 2021, after Nielsen requested putting its national service on "hiatus" in August 2021 so it could concentrate on the development of its new cross-media measurement service Nielsen One, which has been undergoing early beta testing with big advertisers and agencies.

Shortly after the MRC suspended its accreditation, Nielsen CEO David Kenny sent a letter to the industry vowing it would be reinstated "within months." That was 14 months ago.

"It is profoundly disappointing that someone has shared a confidential document that presents only one side of the story of our ongoing engagement on Nielsen’s national TV service," MRC Senior Vice President-Associated Director David Gunzerath said in a statement referring to a news report citing a leaked document about the committee's decision to continue suspending the service.

"While it is true the existing suspension of MRC accreditation remains in place at the current time, it is also true that we believe Nielsen has made significant progress on most of the issues that led to that suspension, and MRC continues to actively work with Nielsen on a path to address the remaining issues so that a consideration of reinstatement of accreditation to the National TV service may occur relatively soon."