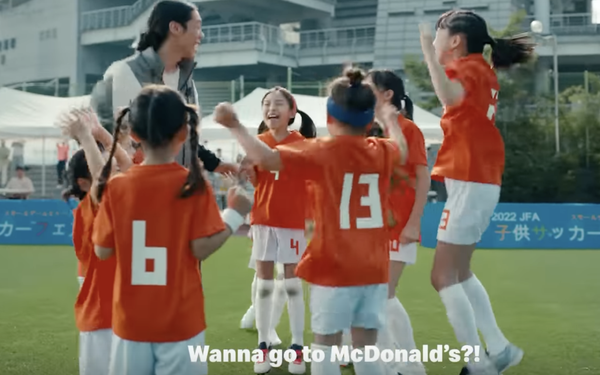 McDonald’s has released its first World Cup ad, a spot that will run in more than 75 of its markets.

That question is rendered in different languages and dialects, including “Fancy Maccy D’s?” in an English accent and “Can you get us McDonald’s?” in Korean.

In the Middle East, McDonald’s will host “The Happiness Swap,” in which every time a referee throws a red card, fans can take a photo, draw fries on the card and post it with the hashtag #WannaGoToMcD. When they do, they’ll receive a promo code for free McDonald’s fries on the app.

McDonald’s will also partner with Arab soccer commentator Raouf Ben Khelif, who will ask TikTok users to add their commentary to his video.

The FIFA World Cup begins Nov. 20 in Qatar. The event was also promoted in Coca-Cola’s “Believing is Magic” campaign launched in September.

Anheuser-Busch announced it will promote its alcohol-free beer, Budweiser Zero, during the World Cup.

Though alcohol is available at the event, it will only be sold after 6:30 p.m. at the festival at an official event in Doha.

In 2014, Anheuser-Busch InBev was part of a group of World Cup sponsors that voiced concerns over allegations that bribery and corruption were behind Qatar’s winning tournament bid, according to The World Street Journal.