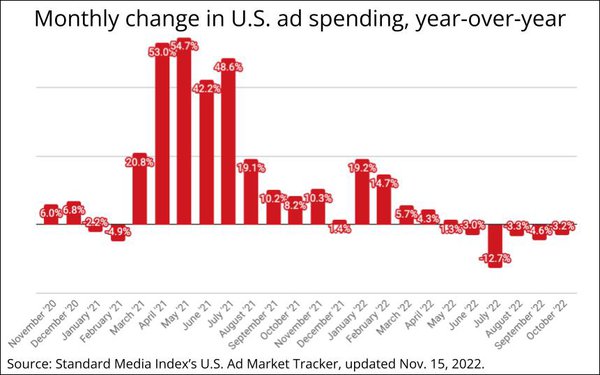 The U.S. ad market declined for he fifth consecutive month in October, continuing a downward slide mirroring the downturn in the U.S. and global economies, according to a MediaPost analysis of Standard Media Index's U.S. Ad Market Tracker.

While there is no standard definition of a U.S. ad recession, the downward trend appears likely to extend to at least two consecutive quarters next month, because it will compare with November 2021, which was the strongest ad growth month of the fourth quarter a year ago.

In recent weeks, GroupM's business intelligence chiefs Brian Wieser and Kate Scott-Dawkins have been poking fun in their weekly "This Week Next Week" podcasts of analysts and journalists -- including "headline writers" -- who suggest that the ad marketplace has fallen into recession, but the SMI index is the most current empirical data on actual U.S. ad spending by the major agency holding companies, big independents, and their clients. It's also weighted to adjust for agencies and advertisers not represented by the core data in SMI's pool, so i likely is the best month-to-month snapshot of relative advertising growth in the U.S.

Through the first ten months of 2022, the SMI index is averaging a 1.6% rate of growth.

The GroupM team have also indicated that despite much of the macroeconomic signals and public media company revenue data they track has been trending downward, they still see positive indicators of sustainable growth from key categories and media, and likely plan to maintain healthy growth estimates for U.S. ad spending when they update their 2022 forecast in their year-end outlook next month.

The team did indicate that they will definitely be reducing their estimates for the national TV advertising marketplace when they do so, which does coincide with the U.S. Ad Market Index's trend line (see data below).

While the index has a monthly lag in refreshing national TV data, the overall index currently estimates that digital media's share of total U.S. ad spending rose to 56% in October, a four percentage point gain from 52% in October 2021.

While big advertisers have been driving the downturn for most of the year, the most recent months show smaller ad categories also are declining. In October, the top 10 fell 3.2%, while all other categories fell 2.8%. 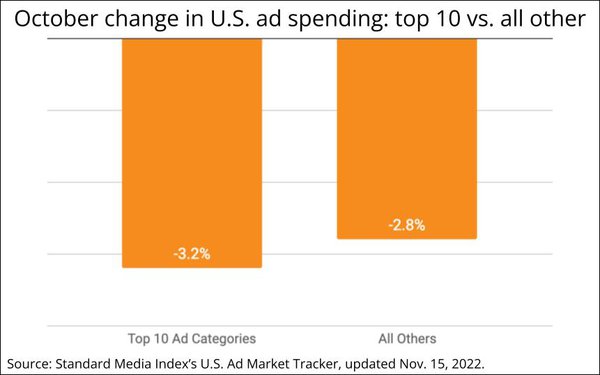