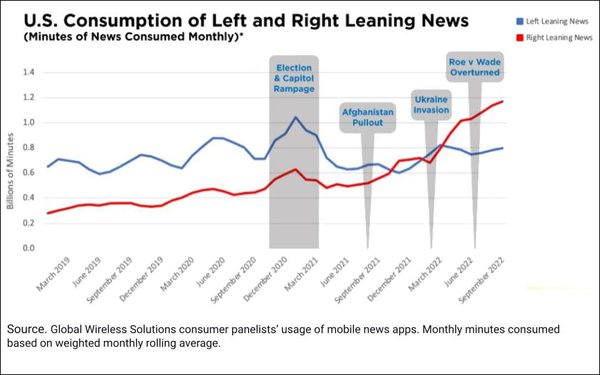 While we now know that Republicans’ 2022 midterm results failed to produce the much-predicted “red wave,” it clearly wasn’t for lack of consumption of right-leaning media, according to an analysis of mobile usage trends by mobile insights consulting firm Global Wireless Solutions (GWS).

The report, based on GWS’s  panel of 200,000 adult smartphone users, with 54 million data points analyzed daily, found that as of a week prior to the November elections, consumption of right-leaning news on mobile devices was up 86% compared to its highest point during the 2020 presidential elections.

In contrast, mobile consumption of left-leaning media was down by 23% during that timeframe, and had lagged behind right-leaning outlets since November 2021.

Due to the strength of the right-leaning trend, at its peak during the midterm election cycle, total mobile news consumption was up 18% compared to its high point in January 2021, with Americans spending 93 minutes per week on this activity.

The right-leaning consumption was driven by men, who showed a 110% increase in mobile media news consumption minutes just prior to the midterms compared to January 2021. Male mobile users’ consumption of left-leaning media declined 10% versus its peak after the 2020 election.

Hispanic men consumed 152% more minutes of right-leaning media in 2022: 204 minutes per week, on average. Consumption of left-leaning media by Hispanics has declined by 31% since 2021.

The analysis classified left-leaning versus right-leaning media outlets based on information from news content ratings service Ad Fontes Media, and focused on larger outlets based on presence, popularity and panelists’ consumption rates. Data on average minutes of news consumption is based on insights from users who access mobile news via dedicated news apps on their smartphones.