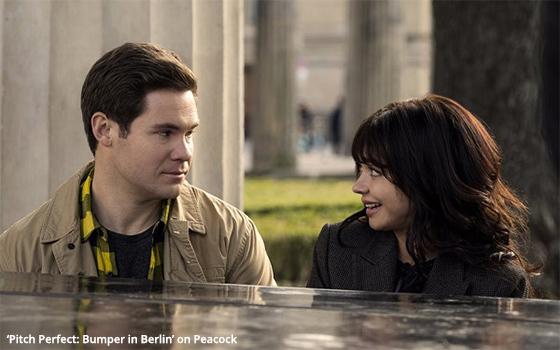 A new series coming to Peacock on Wednesday is pitch perfect.

As a matter of fact, the series is descended from the hugely popular, musical “Pitch Perfect” movies and continues the series with the focus on one of the movies’ best-loved characters, the ever-cheerful Bumper Allen.

Fortunately for the new TV show, the effort was made to bring Devine back to take up the role again.

Apparently, he agreed to do it, which was far preferable to casting someone else to play such a well-known character.

When we first meet Bumper, the time is the present day and the music career he once hoped for has stalled.

He is now a security guard, and to some degree, he still holds on to the old ambition of achieving stardom.

Then, suddenly, he hears from a Berlin music promoter who tells Bumper that a video on TikTok has made him a sensation in Germany.

And so, Bumper happily relocates to Berlin to work with someone he has never met nor knows anything about. What could possibly go wrong?

Well, whatever happens to him (no spoilers here), nothing goes wrong with this show. Previewing this show may emerge as the best such experience I have had all year.

The show has heart and humor -- both resulting from top-notch writing. Not surprisingly, some of the show’s highlights are its high-quality musical numbers.

Anyone who saw Adam Devine in his recurring role as Andy Bailey on “Modern Family” is familiar with his scene-stealing talent.

For more than 20 episodes he was a family friend and potential love interest of Dunphy daughter Haley, played by Sarah Hyland.

In a welcome bit of casting, she co-stars with him in “Bumper In Berlin” and it is great to see them both together again. That’s them, in the above photo.

In addition to the show’s storyline about never-say-die hopes and dreams, the show is also a riotous send-up of Germany and German stereotypes such as the Berlin dance club in the first episode that is going full-throttle in the middle of a typical afternoon.

“Pitch Perfect: Bumper In Berlin” comprises six episodes, each around a half-hour. It is entertaining, smart and a pure pleasure from beginning to end.