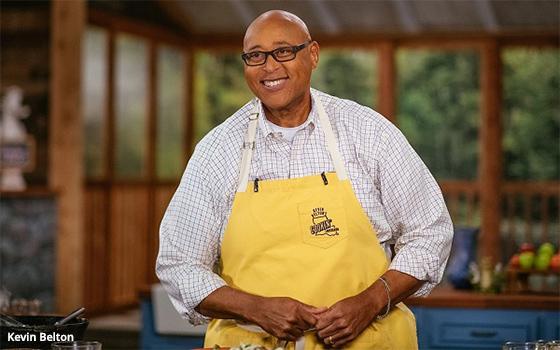 New Orleans-based TV Chef Kevin Belton has some advice for home chefs this Thanksgiving: Turn that bird upside down!

You read that right. In a break from the traditional way almost everyone roasts their Thanksgiving turkeys, Chef Belton says he roasts his turkeys breast-side down for one simple reason: There is more fat on the bottom side of a turkey, and if that bottom side is on top, then the fat drips down through the bird, essentially self-basting it for its entire roasting time.

Among other benefits, the turkey breast that is now roasting and self-basting on the bottom stands a much better chance of coming out moist and juicy, instead of the breast dryness that is the bane of home chefs at Thanksgiving.

In a pre-Thanksgiving appearance on WWL-TV, the CBS affiliate in New Orleans, Chef Kevin acknowledged that finished turkeys that come out of the oven breast-side up are more familiar and attractive to many.

But he believes the flavor of his upside-down roast turkeys trumps the traditional presentation of a breast-side up bird. His special recipe is below.

“In Louisiana, we’re about flavor. It’s all about the taste,” he explained. “Basically, the whole reason why we’re cooking it this way is so all those juices from the dark meat run down into the breast.

“That way, it’s more important about the flavor, I think, than just taking a picture [of the finished breast-side up turkey],” he said.

Based at public TV station WYES in New Orleans, Belton was an instructor at the New Orleans School of Cooking for 20 years before starting his TV career in 2016 with his first show, “New Orleans Cooking With Kevin Belton.”

In recent years, Belton has received national exposure via the digital subchannel known as Create, a network for cable systems that was developed by public TV stations WGBH, Boston, and WLIW, Long Island.

His shows are among the many cooking, travel and craft shows seen on the channel that have been curated from local and regional public television stations.

On his shows, his demeanor is gregarious, warm and infectious as he walks viewers through the process of preparing and cooking foods from the south Louisiana region where he grew up. As each dish takes shape, his excitement grows, and so does ours.

In addition to the recipe for Chef Kevin’s upside-down turkey below, from the WWL-TV website, he expands on the process in the accompanying segment seen on the station.

Among other tips not reflected in the recipe: Chef Kevin favors seasoning the bird a day before roasting, if possible.

And he also suggests an intriguing alternative to a roasting rack to support the turkey -- namely, trade the rack for a loaf of French bread placed underneath the turkey, with vegetables such as sweet potatoes placed around the bread in the roasting pan too.

He also shares his method for carving this upside-down turkey when it is all done.

If the turkey is frozen, thaw it in the refrigerator. For a 12-15 pound turkey, this will take about 3 days, estimating 5 hours of thaw time for each pound of turkey. Note: Since this TV Blog is being published one day before Thanksgiving, this step does not apply.

Remove the giblets and neck from inside the turkey's cavity and set the turkey breast-side down on a roasting rack inside a roasting pan.

Sprinkle the turkey inside and out with the Creole seasoning.

Place the dressing and herbs in the cavity of the turkey.

While the oven preheats, let the turkey sit on its rack in its upside down position for 15-20 minutes before roasting.

Arrange an oven rack in the middle of the oven and remove any racks above it.

Roast the turkey for 20 minutes to darken and crisp the skin, then reduce the heat to 325 degrees and roast the bird for approximately 2 hours more.

Remove the turkey from the oven and let sit for 20 minutes before carving.