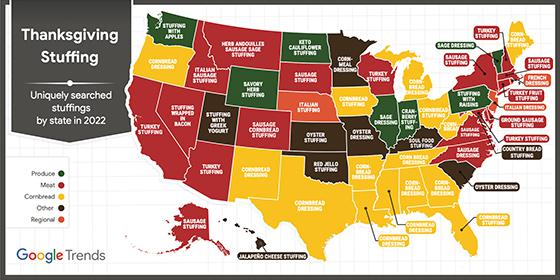 How to cook a turkey and side dishes are typically the top Google Search queries this time of year.

Google has compiled search trends around Thanksgiving meals, suggesting the most popular way to cook a turkey, the most popular side dishes and desserts by state, and what people are interested in doing during their day off.

The majority of U.S. search queries show an interest in how to cook the bird, according to Google Trends. With the exception of New England, a couple of southern states, and Hawaii, the data shows that most of the country searched for a “smoked turkey” cooking method, including Pennsylvania.

Pumpkin pie -- always a favorite in my home -- came in as the No. 1 searches desert across the country with 43% of the searches, followed by apple pie with 25%, pecan pie with 19%, sweet potato pie with 11%, and cranberry pie with 2%.

The Associated Press reports that Americans are seeing double-digit percentage increases in the price of turkey, potatoes, stuffing, canned pumpkin and other staples.

The U.S. government estimates food prices will be up 9.5% to 10.5% this year. They typically rise about 2% annually.

Google Search Trends data makes no mention of prices for foods and fixings, but it does list the searches related to holiday traditions such as the Macy’s Thanksgiving Day Parade.

Surprisingly, in-store shopping is back in style. There is once again more interest in Black Friday this year compared with Cyber Monday, according to Google Search Trends.

Some 31% of U.S. adults plan to do most of their holiday shopping in-store this holiday season.

More than one in four plan to increase in-store shopping this year compared with last year. Among all age groups, Gen Z is most likely to shop in-store on Black Friday, with 56% planning to do so, according to Samba TV and HarrisX data.