Calorie Count Is High For Sugary 'Fit For Christmas' On CBS 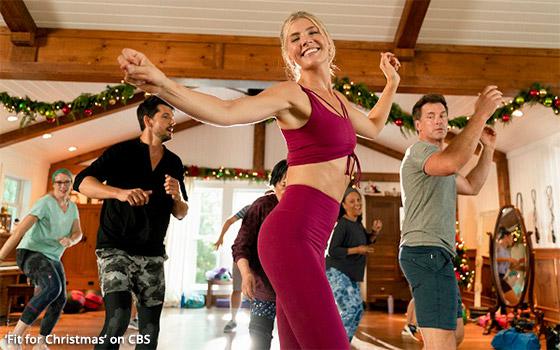 Online sources disagree about the weight Americans gain on average from Thanksgiving through New Year’s.

One consensus is 8 pounds. But for every site that provides this number, there are other sites whose experts insist that the very idea of widespread holiday weight gain is a myth.

Or, at the very least, they say an average of 1 pound is more like it.

As this weighty debate rages, a new holiday-themed movie coming to CBS this weekend puts the words “fit” and “Christmas” into the same title -- “Fit For Christmas.”

The title refers primarily to the movie’s main character, Audrey. She’s a physical fitness instructor and personal trainer who returns to her Christmas-obsessed hometown of Mistletoe, Montana, after professional and personal reversals in New York City.

The gym she established with her boyfriend Bradley went belly-up, and then she and Bradley decided to not quite break up, but to take a break.

So she goes back home, and wouldn’t you know it? It is the onset of the Christmas season in Mistletoe.

There, she soon learns that the town’s beloved recreation and community center is under threat from an out-of-town developer who wants to build a resort on the center’s property.

But wait, there’s more. The development company’s agent who has come to town to get the ball rolling on this resort scheme is a handsome single man.

He and Audrey meet cute when he collides with her while walking on a Main Street sidewalk, upsetting the box of Christmas décor she is carrying.

After that, they spar. But will “spar” turn to “sparks?” This is, of course, the same basic storyline of all of these Christmas season movies.

They are said to be enormously popular, which is the reason so many more of them are being produced each year.

Audrey is played by Amanda Kloots (pictured above), who has been one of the co-hosts of “The Talk” on CBS since 2021. She is also the executive producer of “Fit For Christmas.”

She was once a Rockette, and has done stage work in several Broadway musicals. She also happens to be a fitness instructor.

Whether or not many people gain 1 pound or 8 pounds during the holidays, where the sugar-sweet “Fit For Christmas” is concerned, the calorie count is off the charts.