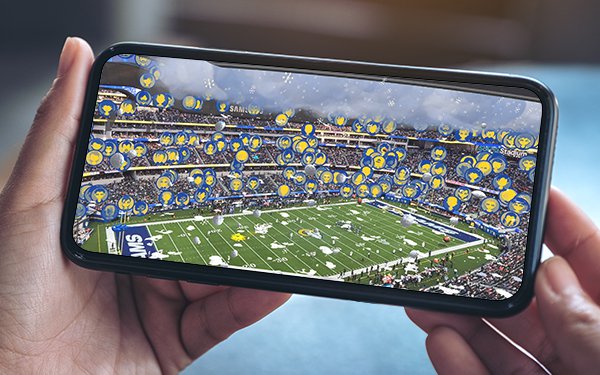 Here’s one for record books, or I guess I should say the virtual record books—the largest snowball fight in the world of augmented reality occurred on Christmas Day at SoFi Stadium where the Los Angeles Rams play.

That’s according to ad/marketing holding group Stagwell, which earlier this month brought its AR platform ARound to the stadium. It’s designed to engage fans with virtual activities via smartphones and enhance live game-day fun at the venue.

And no doubt many attendees wanted a diversion from the very lopsided game—the Rams beat the Denver Broncos 51-14.

Bring on the virtual snowball fight, where some 42,000 snowballs were tossed by 1,500 participants. The record is the 42,000 snowballs thrown. Average engagement time per participant: more than 15 minutes. (I should mention that SoFi sponsors the AI content at the stadium).

In terms of participants, the real world still holds the record, according to Guinness, in a battle staged in Saskatoon, Canada in 2016 when 7,618 snowball throwers showed up to wage war.

Apparently, there was no attempt to keep count of the number of snowballs thrown.