OMD CES Panel: Prep For Explosion Of 'Walled Gardens,' Why It Will Be A Good Thing 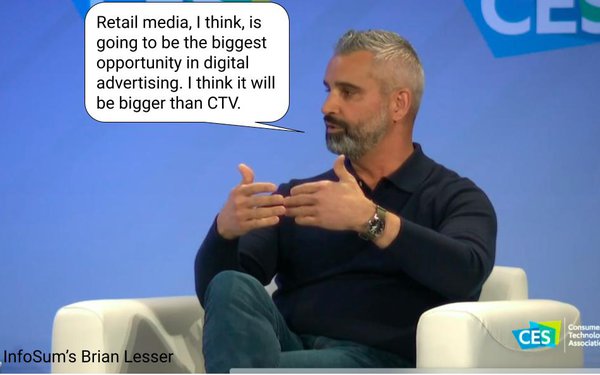 LAS VEGAS – At a time when many in the ad industry have been predicting the demise of so-called “walled gardens” controlling the flow of consumer data, an industry visionary made a compelling case Thursday that we are on the cusp of an explosion of new walled gardens -- especially from big retail media operators -- but that it will actually be a good thing, not a bad one for the ad industry.

“I actually think there will be more walled gardens in the future,” Brian Lesser predicted during a CES session hosted here by OMD.

Lesser was a long-time WPP and GroupM executive, responsible for the holding company’s development of its own, internal walled garden -- which Lesser described as a consumer “identity spine” -- before leaving five years ago to run fledgling data clean-room developer InfoSum.

In addition to already established walled gardens like Amazon, Google, Meta, etc., which control most of the digital ad industry’s consumer data, Lesser said the burgeoning retail media marketplace has effectively created a new class of walled gardens represented by companies like Kroger, Albertsons, Target, Walmart and others -- which have also been historically reluctant to share “transactional data” about consumers.

“Retail media, I think, is going to be the biggest opportunity in digital advertising. I think it will be bigger than CTV,” Lesser said.

He also predicted that “everyone will have a clean room” -- but cautioned that not all of them would be created equal, and that the industry likely would go through some growing pains as it sorts through their capabilities and their interoperability to get to a place where they actually facilitate rather than impede consumer insights for brands and agencies across all media channels.

“A walled garden doesn’t mean it can’t be a fluid marketplace,” he asserted, adding that if developed and applied properly, data clean rooms can actually improve consumer insights and more efficient media buys for brands and agencies.

“Then I think advertisers can buy fluidly -- and measure fluidly -- even if these are walled gardens of inventory, because the data can move more freely,” he said.

Lesser said he’s already seeing signs of that happening with the preexisting walled gardens and disclosed a recent collaboration InfoSum struck with Google.

Dubbed “PAIR” – for publisher advertiser identity resolution – the partnership enables InfoSum and its customers to pull anonymized consumer data directly from Google and apply it to their own first-party consumer databases.

“If I told your five years ago that Google is going to partner with a company like InfoSum to get customer data in and out… you’d say, ‘No way, it’ll never happen. You’re crazy.’,” he noted, adding, “They’ve now opened up and said, ‘We want to have data come in and out. We just want it to come out in a private and secure way that doesn't compromise any of the customers that we are serving advertising to and protect the advertisers that are spending money with Google.’ That’s a really good sign.

“I actually think there will be more walled gardens in the future, not fewer, but we have to adjust our thinking such that a walled garden doesn’t mean it can’t be a fluid marketplace.”

Lesser, who recently struck a major clean room deal with OMD parent Omnicom in an effort to do that, noted that it is the real opportunity for data clean rooms, even though many in the ad industry have been focusing on the new technology as being a practical solution to the deprecation of browser cookies and other digital consumer data identifiers.

“Data clean rooms were not intended to be a solution for cookie deprecation. It’s somewhat of a happy accident that this technology prepares brands, agencies, media companies and others for a day when you cannot use cookies, or some other persistent identifier that sort of looks and acts like a cookie,” he explained, adding, “I think sometimes we get distracted by cookie deprecation and fail to realize the bigger picture, which is data clean rooms – or our new approach to data collaboration – is as signifiant to customer data management as programmatic was to digital advertising.”

Two marketers on the OMD panel -- Clorox Vice President-Marketing Transformation Doug Milliken and Wells Fargo Head of Media & Owned Channels Science Shamsa Jafri -- indicated that would be a welcome thing, though they described themselves as being at two different stages of their clean room adoption.

Jafri described Wells Fargo as being in an early stage, while Milliken said Clorox has made it one of its top five corporate priorities related to consumer data and insights.

He said while Clorox still is working on "basic use cases" such as reach and frequency analysis and "audience overlap," things are about to get "more complex" and that ultimately, processing walled garden data through clean rooms will enable companies like his to finally begin understanding consumer behavior across an increasingly fragmented media marketplace.

“We think about the consumer holistically," he said. "We’re just trying to create an end-to-end experience to help them. So we think in terms of marketing objectives and channel mix, but we’re kind of up against an ecosystem that’s pretty siloed, kind of walled gardens. And that’s just a challenging structure.”

Currently, he said that structure requires companies like Clorox and their agency partners to conduct a "unique negotiation" with each media and/or data partner about what they can share and that there's "not a lot of interoperability between those platforms." 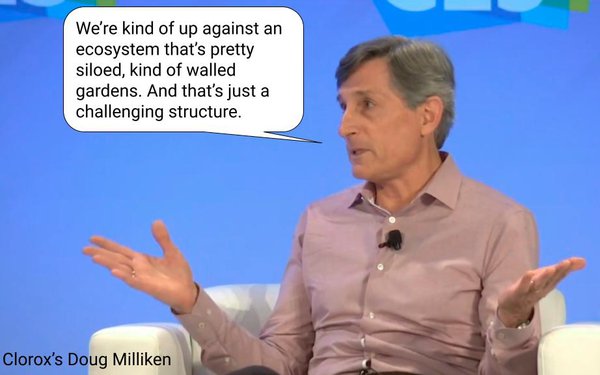