10:15 AM ET
Fireside Chat: MediaPost’s Automotive Marketer of the Year
Allyson Witherspoon has made anticipating and responding to shifting consumer needs and preferences a priority during her three years as vice president and  chief marketing officer, Nissan U.S. As of late, Witherspoon has been  orchestrating marketing that honors the brand’s 80-year heritage while showing off the “New Nissan.” Despite chip shortages and supply chain issues facing the entire automotive industry, Nissan Group’s calendar year 2021 U.S. sales increased 8.7% compared to the prior year.
Watch Video

View More Details
Watch Video
11:00 AM ET
Coffee Break/Networking
11:15 AM ET
Volkswagen ID. Buzz Steals The Show at SXSW
Volkswagen of America launched a three-year sponsorship at SXSW and rolled into town with its pre-production ID. Buzz electric vans. The brand set up shop at the “Buzz Stop” and started taking leads via product specialists. That’s just the beginning of the two-year lead up to when the vans will actually hit the market. How do you keep consumers interested and sustained for a two-year wait?
Watch Video

View More Details
Watch Video
12:30 PM ET
MediaPost Agency of the Year (Traditional): Nissan United
TBWA’s dedicated multi-agency leadership team within Omnicom directs all U.S. marketing and communications for Nissan. The agency has created campaigns that effectively communicate the automaker’s objectives in “Nissan Next,” which is not only a business transformation plan but also focuses on changing the automaker’s culture and brand ethos.
Watch Video

1:00 PM ET
Keynote Interview: A Sneak Peek Into Kia's Marketing Playbook
The Kia EV6 is just the beginning of what the future holds for the Kia America brand, which is embarking on an entirely new direction. The automaker, on the cutting edge of marketing innovation, recently released its first nonfungible token (NFT), which is based on Robo Dog, the character featured in its popular Super Bowl LVI commercial.
Watch Video

1:30 PM ET
Case Study: INFINITI Shows How to Take on Life in Style
Shelley Pratt reveals how women are changing the way the automaker designs luxury vehicles and what is to come in 2022 and beyond for the brand. Pratt will also reveal a look behind the curtain on the strategic development and execution of INFINITI's marketing communications and strategy. INFINITI will be a popular destination at this year’s NYIAS with activations such as INFINITI Sound pods, providing guests with a brief respite from the noise of the auto show floor and a private screening of the Beautiful Mess advertisement as well as a QX60 Walk Around video. The QX60 WebAR experience will allow guests to utilize their own mobile phones to access pre-existing INFINITI content highlighting QX60 features.
Watch Video

View more details
Watch Video
2:10 PM ET
Coffee Break/Networking
2:30 PM ET
MediaPost Agency of the Year (Digital): Weber Shandwick (General Motors)
Traditionally a PR agency, the company has taken on more creative duties across the General Motors divisions, including launching Chevrolet’s TikTok channel, which has 272.1K followers and 1.7 million likes, and a viral campaign for General Motors’ Super Cruise technology. The agency was recognized by the automaker as one of its most innovative partners.
Watch Video

3:00 PM ET
Case Study: Jeep Highlights Detroit In Social Campaign Featuring Jalen Rose
Jeep recently marked 10 years of sponsoring the leadership academy founded by ex-NBA Star and ESPN analyst Jalen Rose. A six-week campaign, "Where I'm From," features Rose, who pays tribute to the Detroit streets and the neighborhoods that have helped him thrive and influenced his success. It celebrates people from great cities across the nation, including Detroit, who are making an impact.
Watch Video


Located in Hell’s Kitchen, Manhattan, Jacob K. Javits Convention Center boasts a total area space of 1,800,000 square feet and has 840,000 square feet of total exhibit space. It is one of the busiest convention centers in the United States. Javits Center hosts events such as the New York International Auto Show and New York Comic Con. In the city that never sleeps, the Javits Center is the nexus of American pop culture, where some of the most iconic brands have unveiled their latest ideas and creations. It's where deals are made, products are launched and heroes are born. 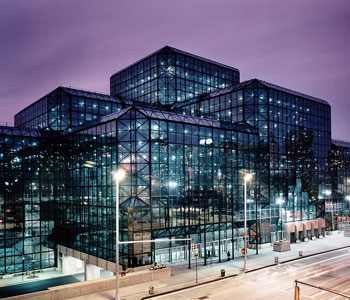