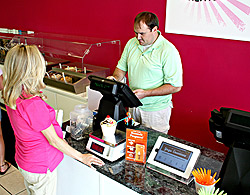 As initially reported in OnlineMediaDaily on August 20, customer loyalty platform developer and San Francisco-based SpotOn has launched a new digital network that puts a twist on the concept of electronic commerce.

Instead of e-commerce, consider its version t-commerce, as in tablet commerce. The network consists of tablet computers distributed at brick-and-mortar stores that enable customers to “check in” to participate in customized loyalty programs.

The network, which has been in beta development for more than a year, officially rolls out today with a base of about 1,500 merchants -- mostly mom-and-pop retailers, but a few regional chains as well.

Customers can use the tablets to type in their loyalty card numbers or use the cameras on the tablet to scan the image of their card. Then they can check in for reward benefits, such as discounts, electronic coupons and special offers.

"Customers love the simplicity of checking in on the tablet while we're ringing up their purchase,” says Truett. "Now, when we run specials, we know exactly how many people we've reached, how many responded and how they've used the promotion.”

Since installing the tablets in April, YoGo Creations has had more than 2,500 check-ins from SpotOn members, with each one boosting sales by as much as 35%. The rewards offers typically are run during slow periods to boost sales.

Currently, SpotOn’s merchant network is concentrated in Texas, California, Arizona, the Midwest and in the Atlanta area. The company says it is adding new merchants at a rate of about 500 per month.

Merchants pay a monthly fee to install the tablet and for access to a merchant’s dashboard, giving them access to their customer database, as well as tools for building customized loyalty programs to suit their specific business needs. Data includes typical spend, redemption activity on deals and Facebook activity.