Luxury Is In The Words Of The Beholder

Recently, I had the pleasure of presenting the results of our latest monthly pulse to luxury and affluent marketers in Chicago and New York. This ongoing, insights-oriented survey differs from others as it focuses on consumers’ thinking about their lives and the economy, as well as their plans for the future. This, in turn, provides marketers with the context they need for the decisions to be made, delving into consumers’ optimism about the economy, financial goals, worries, etc., plus probing issues of current interest in both the affluent/luxury marketplaces and the mass markets. In that context, I was frequently asked to find out: What do the words “luxury” and “luxurious” really mean to consumers in their own words?

So, in a recent wave of the survey, we asked that question and, when we reviewed their descriptions and put them into a Word Cloud, we noted that all consumers (mass and affluent as well as very affluent buyers) used the 23 words in the following exhibit most frequently to describe the words “luxury” and “luxurious.” 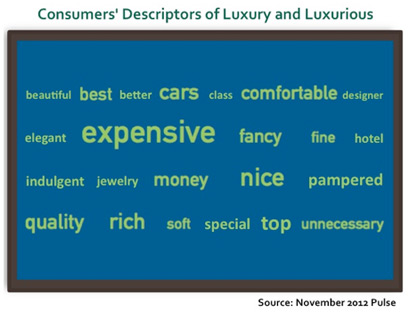 Notably, the word used most frequently by all consumers was “expensive”, while two of the words, “indulgent” and “unnecessary” were not particularly positive terms. Three words that emerged were about specific items--cars, hotels and jewelry.

As luxury items are largely bought by high-income segments, we then decided to delve into how those who tend to buy luxury describe the words of interest. Based on the following exhibit from the same survey, we looked at the words used by those consumers who live in households with incomes of  $250,000 or more (about 7 million adults), as the majority of these adults (57%) told us they had bought a luxury in the past 12 months. 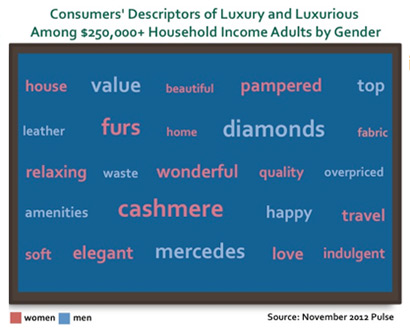 When we reviewed the words these high-income adults used and then sorted them by the words women tend to use (they are in pink) compared to those men tend to use (they are in blue), it’s evident these high-income consumers use materially different words (24 words) than all consumers use to describe “luxury” and “luxurious” as noted in the following exhibit. In the next exhibit, we’ll focus on the words that high-income men and women share in common. 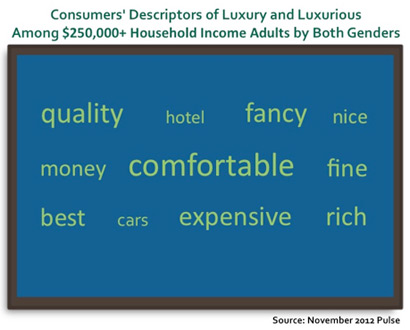 When one reviews the 11 words that both women and men use that are displayed in the following exhibit, it is notable that they are descriptive and in most respects devoid of any passion.

Clearly, based on our recent survey, we recommend that marketers of luxury products and services take into account that luxury is in the words of the beholder and that luxury differs materially when the consumer is a woman compared to a man.