Luxury Purchasers: Who Are They And What Are Their Interests? Part 2

Our previous column, “Luxury Purchasers: Who Are They and What Are Their Interests?,” focused on our finding that luxury goes way deeper than the affluent market segment with household incomes of $75,000 or more. All luxury purchasers — adult consumers (18+ in age) who bought one or more luxury goods or services in the prior 12 months — constitute almost 20%, or about 46 million, of the 239 million adults in the United States. Luxury marketers would be correct in surmising that as household income increases, the proportion of luxury purchasers rises.

Notably, though, luxuries were bought by almost as many mass-market consumers whose household income is less than $75,000 (20 million adults who are not typically classified as affluent by marketers) as by those with household incomes of $75,000 to $249,999 (about 22 million affluent consumers), plus the four million luxury purchasers in the upper-income segment of $250,000 or more. This being so, it’s our point of view that the luxury market is actually much larger than many luxury marketers currently believe. After that column appeared, a number of readers asked me the following three questions that delve into how valuable the three luxury buyer market segments are:

1. How many times did these consumers buy a luxury in the past 12 months? How do mass-market consumers compare with the more affluent consumers?

2. How much did these consumers spend on their most recent luxury purchase?

3. How was the most recent luxury purchase bought (with cash, on credit, from savings)? 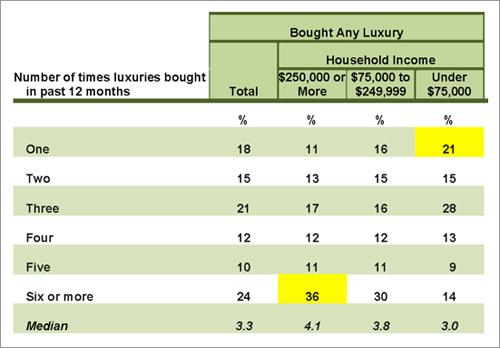 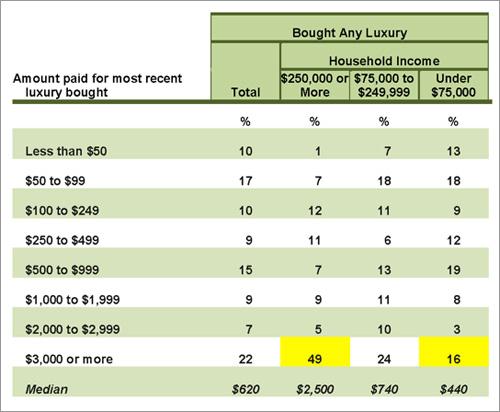 While a majority (62%) of very affluent purchasers paid for their most recent luxury with available cash, almost one half (47%) of mass-market purchasers saved up the money to buy their luxury item. Credit was used by about the same proportion (more than one-fifth to one-quarter) of the three household-income segments. 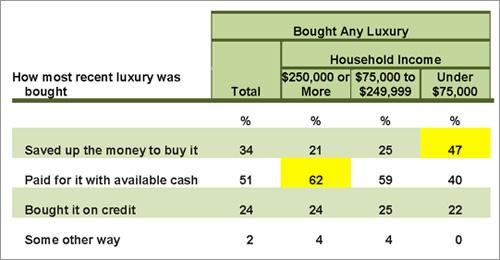 While it is likely that luxury marketers wish that all luxury purchasers could behave in the same way as the affluent and very affluent luxury purchasers, it’s our point of view that mass-market consumers should not be overlooked — especially in the more affordable luxury categories (wine, spirits, beauty, etc.). After all, doesn’t it all go to the bottom line?