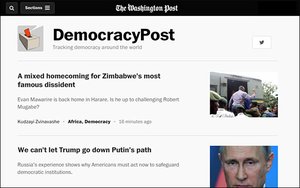 Democratic governments worldwide appear to be on the down slope, headed toward a populist, authoritarian future.

The Washington Post, in order to chronicle and help their readers better understand the state of democracy in the 21st century, has launched DemocracyPost. The opinion page covers the “challenges facing democracy around the world.”

DemocracyPost will be part of the larger Global Opinions section of WaPo.

The page will feature opinion pieces from contributing activists, authors and academics from various countries with strong histories of liberal traditions and values.

“Democracy is one of the most prominent topics that we cannot afford to take for granted. The rise of populism in many parts of the world has shown us that even the most robust democracies face major challenges today,” Caryl wrote on a WaPo page announcing the new section.

“DemocracyPost will deepen our international coverage by sharing a close-up view of political struggles around the world. Through timely and provocative commentary, our readers will have direct access to the people who are personally invested in the evolution of democracy worldwide,” added Fred Hiatt, editorial page editor.