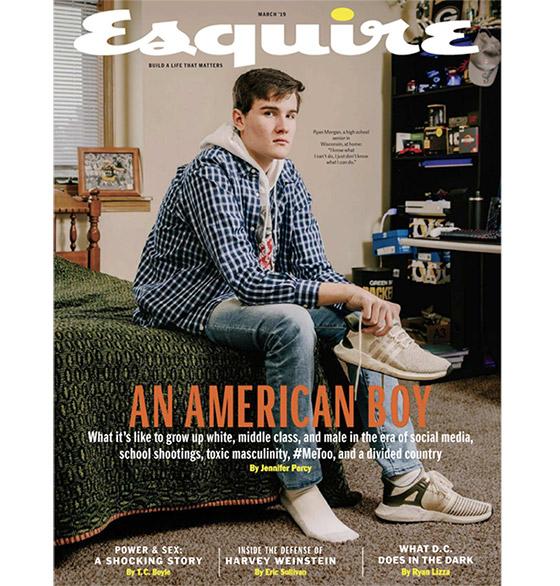 Esquire’s editors are doing something right with their March cover story that triggered a social media backlash by stirring up the hornet’s nest of American identity politics. The men’s glossy deserves to be feted with an onslaught of “fist bump” emojis.

The magazine’s cover story profiles 17-year-old Ryan Morgan, a high-school senior from West Bend, Wisc., with the headline “An American Boy.” “What it’s like to grow up white, middle class, and male in the era of social media, school shootings, toxic masculinity, #MeToo and a divided country,” the subhead reads.

The lengthy article chronicles Morgan’s daily life and describes the adversity he’s faced for being a supporter of President Trump.

“I couldn’t say anything without pissing someone off … Lots of drama over politics,” Morgan says. “It ruined friendships and changed social groups. People were making friends based on their politics more than anything.”

The story started trending on Twitter as people expressed their outrage for profiling a white kid during Black History Month, which is observed in February. Technically, Esquire is publishing the story in its March issue, which will remain on newsstands until the middle of next month.

“Esquire dropping this ode to white male privilege that no one asked for... during Black History month is just... ugh,” Jenna Amatulli, a reporter at Verizon-owned HuffPost, tweeted.

“Because you know what we don’t discuss nearly enough? The white male experience,” Jemele Hill, a reporter for The Atlantic who used to work at ESPN, said on Twitter.

“The editorial choice to use ‘American Boy’ to describe a white, cis, Republican teen is gross negligence in 2019,” Zara Rahim, head of communications at women’s workspace The Wing, posted.

The knee-jerkers in the Twitterverse haven’t been this triggered since they collectively excoriated 16-year-old white boy Nick Sandmann, a student at Covington Catholic High School, a few weeks ago. That shameful episode again showed how quickly many media professionals misjudge people before gathering more facts and context.

The backlash against Esquire only reinforces perceptions that the sanctimonious scolds who make up the media’s Twitter mob are unhinged and out of touch. They’re too busy festering in their own grievances and projecting them onto everything they see to understand why Trump won the election a mere 828 days ago.

Editor Jay Fielden must have anticipated the social-media backlash -- and whether intentional or not, the story is ingeniously well-timed. In an editor’s letter titled “Why Your Ideological Echo Chamber Isn't Just Bad For You,” he explains some of the thinking behind the cover story.

It partly echoes Susan Orleans’ account of a day in the life of a 10-year-old boy in the early 1990s. The story also reflects Fielden’s experience as a father of a teenage boy who’s forming ideas about a world that will mercilessly remind him to “check your privilege.”

“The task of grappling with the world has to be more complicated for kids than it’s ever been,” Fielden writes. Esquire plans to publish an ongoing series about growing up that also looks at black, LGBTQ and female teens. I contacted Hearst to request an interview with Fielden, but didn't hear back at press time.

I’m impressed that Esquire stirred up the Twitterverse -- that at least shows the power of  magazines to urge discussion in the digital age. I also predict the current outrage toward Esquire likely will fade quickly as people turn their attention to the next trending topic and latest blasphemy. The Twitter mob is predictable, while magazine editors never should be.