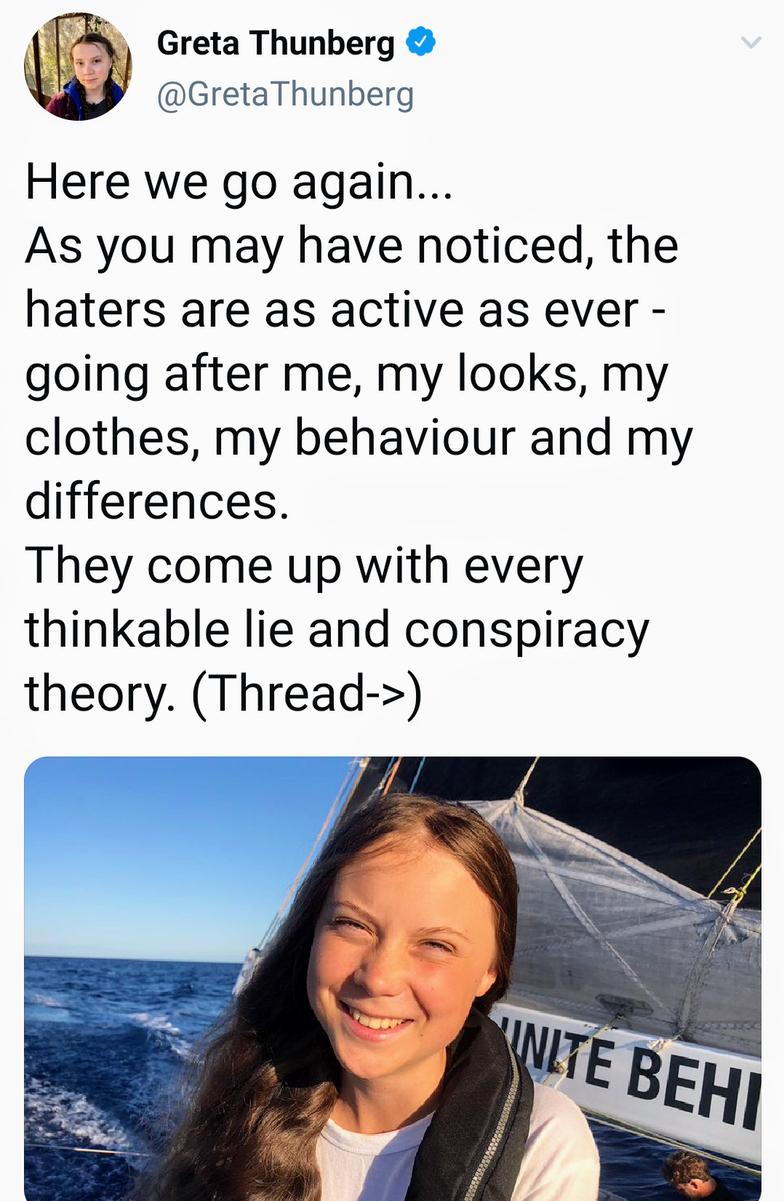 Editor’s note: this opinion is presented without links to encourage readers to do some homework.

Greta is everywhere. She’s a global phenomenon and inspired people – if nothing else—to think more. People are taking to the streets in cities all over the world. Social outrage just went to Warp 9.9.

People are defending, criticizing and beating each other over the head with adjectives and gifs.  She’s evil. She’s a saint. She woke everyone. She pissed everyone off. She’s exploited. Where are her parents? White American guys can’t handle her. All other races, genders and nationalities are 100% cool with her. The Obama’s, The Amnesty’s and The Nobel’s are lining up to have zero emission tea by the fireplace.

She is simultaneously suing Germany and getting an award from Germany.

I’ve spent 20 years in marketing, communications and digital. Marketing is my work life. In the past week, I’ve been watching the Greta love hate mushroom and word clouds very, very closely. I have an arsenal of analytics tools at my disposal. Social subject matter analysis up the wazoo. Weighted examination of topics and those who perpetuate them is fun for me.

As usual, this is an emotional issue, both sides let the amygdala make all the decisions and a lot of gassy emissions are released.  But nothing much else gets accomplished in the way of winning of hearts and minds. Social discourse is failing us and can no longer change minds. The media plays a role, but media at this point exists to gas up filter bubbles, not penetrate them.

Proponents are crazy in love with her and she can do no wrong. People on the other side are just as crazy but giving them attention only fuels their fire. And their cash flow.

There are two kinds of opposition. The first are the ubiquitous click bait troll farms and the other may have a coherent gripe or two. Conversation is wasted on the former and the latter is being accused of every manner of bigoted stupidry – ironically using the same bigoted stupid tactics-- so it’s hard to win them over while objectifying and beating them down.

Here’s a practical exercise for you; go to your Facebook feed right now and make a post with the following statement:

“I think what Greta missed is the fact that you must not lose faith in humanity. Humanity is an ocean; if a few drops of the ocean are dirty, the ocean does not become dirty.”

Welcome back. In the seconds since posting that statement, you have been accused of all manner of evil by adding the phrase: “I think what Greta missed is the fact that” to a Mahatma Gandhi quote.

That’s not what the Internet was supposed to be for, but I know how to fix it. I can change the Internet.  I am white guy, hear me roar. My privilege is my superpower. Let me tell you my truth.

What happens when Greta’s social wave starts to ebb? The detractors with a fame gripe will only increase speed when she gets more perks, more celebrity and more refinement. What will give her the staying power the planet so desperately needs? How, oh how will the Gretocracy win over the skeptics and bring us all together?

Here it is. Are you ready? Hold on to your keyboards. Let’s do this. This is the reason sponsored tweets and boosted posts exist. Mr. Paris, engage the transwarp drive.

First and foremost, ignore the troll sites and low life insults.  Ignore it all. Calling them out only fuels the stupid people and provides a virtue signaling opportunity for social justice warriors already on your side.

Second, team Greta has to embrace the gold. This is the big one. I promise this will work.  The “bury your head in the sand” approach to denying certain, ahem circumstances the detractors call out never works. Well, it works in a sense that one side of the media pretends it isn’t there while the other focuses on nothing else.  Let me give you some examples and I’ll show you how to drive this home. Or sail it there, whichever you prefer.

Greta arrived in the United States in a zero emissions sail boat. True.

Greta arrived in an award winning, estimated $1.4 million-dollar yacht. Also true. This trip is being pitched as having transpired Life of Pi raft style. Not good. Despite all the carefully placed, artfully crafted solo photos, the boat had a crew. Boats need crews. And support teams. Shine a light on the passions of the people who made the boat. Interview one of the people on the crew who sailed the ocean on a boat with great design, wonderful tech and no toilet. Stuff that in everyone’s pipe for a few puffs.

Talk to them. Put down the “where are the parents” people with a fountain of information and humanizing videos.  There won’t be a dry eye on the continent.

Schwarzenegger arranged for a Tesla to drive Greta around the U.S.  True.

Milk it. Don’t let this news cycle sink into the Ocean. If white guys are having issues with her en masse, why wouldn’t you show in glowing terms just how much one of the most masculine beloved white male characters in modern history really adores Greta. “Well if the Governator likes her…” You can see where that ends.

I realize that my mere suggestion that Greta has a team or a strategy or both in and of itself will be received badly.  I suspect because in doing so, I somehow cheapen the effort and one way or another take away some of its magic. When I was a kid my Mom and Dad took me to Disney World. At a tender age, I knew Small World was just a bunch of man-made animatronics, it didn’t take any of its wonder or message away. Disney was not trying to obfuscate that you were in fact in an amusement park suburb called Fantasyland.  I didn’t care, I was still amazed. For our purposes, I don’t think Greta would care either, as long as the message leads to action and results.