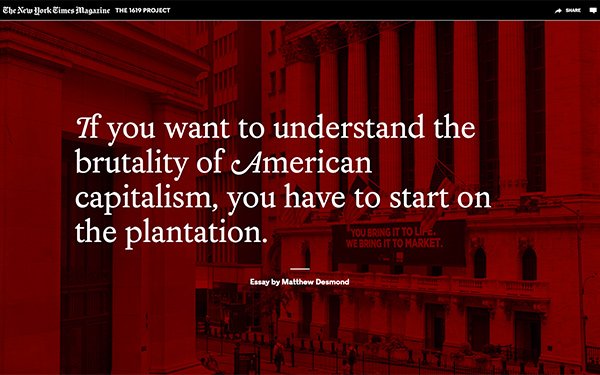 Following the widespread impact and success of “The 1619 Project,” The New York Times Magazine’s special issue marking the beginning of slavery in the U.S., the newspaper has landed a multi-book publishing deal with Random House.

Helming the project at The Times are those who envisioned the dedicated magazine issue. They include NYT’s reporter Nikole Hannah-Jones, who spearheaded the project, The NYT Magazine EIC Jake Silverstein, features editor Ilena Silverman and special-projects editor Caitlin Roper.

“From the beginning, we’ve seen this as more than an issue of the magazine. That’s why we call it a ‘project’: It’s ongoing. It’s collaborative. It’s a long-term effort to build a more just future in this country through a deeper understanding of our shared past,” Silverstein stated.

The books will span several audiences, with a special expanded book-length version of the “1619 Project” issue set to be published by the One World imprint. Another set of four books for younger readers are set to publish under the Delacorte Press and Crown Books for Young Readers imprints.

The books for young readers will serve young adult and middle-grade, in addition to two picture books.

Two visual editions will be published, as well. Random House’s Clarkson Potter imprint will produce an illustrated version of the project and Ten Speed Press is creating a graphic novelization.

The book-length version of "The 1619 Project" will be filled with new and expanded essays, fiction and poetry written by contributors.

Since it published in August, “The 1619 Project” has been turned into a special section of The New York Times, honored with a Sidney Hillman Foundation Award, while Hannah-Jones has received the International Women’s Media Foundation’s Gwen Ifill Award and The Front Page Award for Journalist of the Year. She is also the recipient of a MacArthur “genius” grant.