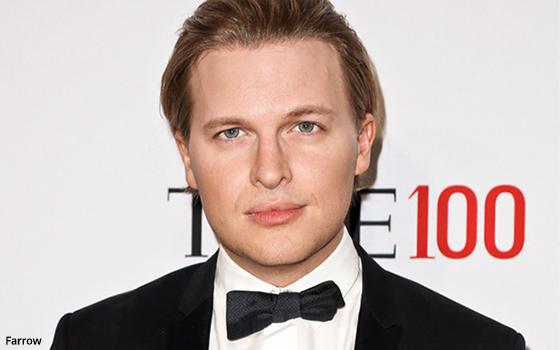 this week performed a noble public service when it gave media reporters a welcome distraction from covering the dismal condition of the industry during the coronavirus pandemic. The newspaper targeted Ronan Farrow, The New Yorkerreporter who is a hero of the #MeToo movement, in an unflattering portrayal accusing him and the magazine of sloppy journalism.

In the article titled, "Is Ronan Farrow Too Good to Be True?", NYT media columnist Ben Smith answers "yes" to that question. His 3,500-word article provides five examples to support the contention that Farrow didn't "follow the typical journalistic imperatives of corroboration and rigorous disclosure" in his New Yorker reporting and best-selling book "Catch and Kill."

Among Farrow's alleged failings was the inability to corroborate a rape allegation against media mogul Harvey Weinstein, Smith reported. Farrow's reporting led to the downfall of Weinstein, who this year was convicted on other counts of sexual misconduct and rape, and sentenced to 23 years in prison.

New Yorker editor in chief David Remnick defended Farrow's reporting: “Working alongside fact-checkers, lawyers and other editorial staff members at The New Yorker, he achieved something remarkable, not least because he earned the trust of his sources, many of whom had to relive traumatic events when they talked to him. We stand by Ronan Farrow’s reporting. We’re proud to publish him.”

Michael Luo, a former NYT editor who oversees The New Yorker's website and has worked with Farrow, lashed out at Smith on Twitter, saying the columnist "does the same thing he accuses Ronan of — sanding the inconvenient edges off of facts in order to suit the narrative he wants to deliver. We provided detailed responses to Ben that contradict the narrative he wants to tell. They didn’t make it into the column.”

While most of Smith's column amounts to nitpicking, he chides Farrow's work as an example of "resistance journalism" that dismisses "the old rules of fairness and open-mindedness" when it produces "damaging reporting about public figures most disliked by the loudest voices."

This form of journalism has "thrived in the age of Donald Trump," Smith contends.

It's quite a sanctimonious statement for a columnist who in his prior job as editor in chief of BuzzFeed Newspublished the discredited Trump-Russia dossier while admitting he didn't know whether its claims were true. BuzzFeed News and the unconfirmed information in the report became its own story, spread among media outlets that were freed from the weighty responsibility of fact-checking its allegations.