More Than 150 Journalists, Academics Speak Out Against 'Harper's' Letter On 'Cancel Culture' 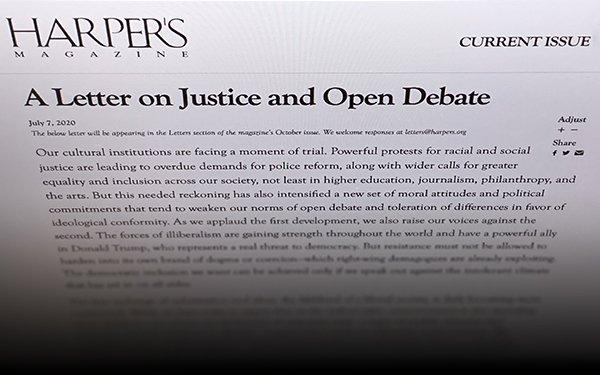 Earlier this week, Harper’s published a piece called “A Letter on Justice and Open Debate.” The letter, organized by writer Thomas Chatterton Williams, expressed concerns over a culture of intolerance that the 150 signatories believe threatens free speech.

Notable writers, academics and other cultural figures, such as Malcolm Gladwell, Salman Rushdie, Gloria Steinem, Yascha Mounk and Noam Chomsky signed the Harper’s letter, which has stoked controversy since.

Today, 163 journalists and academics fired back in a letter of their own for The Objective, which called out the Harper’s piece for showing a lack of understanding of how marginalized people are treated within the same institutions its supporters hail from.

“What the signatories are describing are things that have happened to journalists, academics, and authors marginalized by their respective industries for years — just not in the ways the signatories want to highlight. The problem they are describing is for the most part a rare one for privileged writers, but it is constant for the voices that have been most often shut out of the room,” the letter states.

Those who signed The Objective letter include journalists from Bon Appetit, Vice Media, Jezebel, NPR, McClatchy and The New York Times, in addition to academics from NYU, University of Illinois at Chicago and University of Utah, among others.

The letter addresses each of the six issues brought up in a paragraph of the Harper’s piece, which included editors fired for running controversial pieces, books withdrawn for inauthenticity, journalists barred from covering certain topics, professors investigated for quoting from works of literature, researchers fired for circulating studies and heads of organizations fired for clumsy mistakes.

“Not only is there no significant evidence of inappropriate censure linking these instances, it’s unclear what examples the authors, some of whom are considered writing icons, are even drawing from to make their point,” The Objective’s letter states.

The letter also points out that some of the signatories of the Harper’s piece are guilty of engaging in intolerant behavior themselves, citing Bari Weiss’s attempt to have freelance journalist Erin Biba fired for her tweets and Katha Pollitt’s attempts to “deny trans journalists access to professional networking tools.”

J.K. Rowling, who has stirred controversy with transphobic tweets, and Jesse Singal, who has been criticized for his anti-trans journalism and writing, were also singled out.

The letter, which was started by journalists of color and expanded to the larger journalism, academic and publishing communities, was created through consensus after collaborators contributed their thoughts.

“The intellectual freedom of cis white intellectuals has never been under threat en masse, especially when compared to how writers from marginalized groups have been treated for generations. In fact, they have never faced serious consequences — only momentary discomfort,” the letter concludes.

magazines, politics
1 comment about "More Than 150 Journalists, Academics Speak Out Against 'Harper's' Letter On 'Cancel Culture'".
Check to receive email when comments are posted.
Next story loading