Magazine Covers Still Have Power To Capture History Being Made 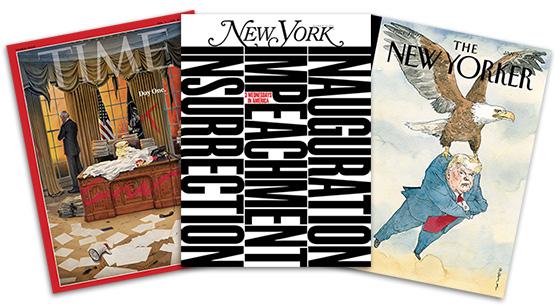 Amid a digital media landscape littered with ephemeral images and quickly forgotten memes, the cover of a print magazine stands out as something more permanent and worthwhile. A cover image can define an era even if the more immediate goal of grabbing attention at the newsstand has been diminished in recent years.

This week's transition of presidential administrations feels especially significant after a bruising election season that culminated in the Capitol riot two weeks ago. A variety of weekly magazines offered different takes on the historic handoff of power with their cover pages.

Time's Feb. 1-8 double issue features an illustration by Tim O'Brien that depicts President Joe Biden looking pensively out the window of the Oval Office, whose desecrated interior hints at the aftermath of the attack on Capitol Hill by a mob of Trump supporters two weeks earlier. Graffiti mars the front of the Resolute desk, a tossed-away MAGA hit sits on the floor amid a mess of scattered papers and stacks of unread briefing books stand in one corner. The biting cover line: "Day One."
“Joe Biden may never unify America," Charlotte Alter writes in a dispiriting essay the cover accompanies. "That may not even be possible in a nation so riven by disinformation and delusion.”
The New Yorker'sJan. 25 cover art by Pulitzer Prize-winning illustrator Barry Blitt shows a bald eagle carrying Trump away in its claws. His arms are crossed in a manner recalling his stubborn refusal to accept the election results after weeks of fruitless attempts to litigate the outcome and shamelessly bully even his most loyal supporters.
In choosing a metaphor for the triumph of American democracy, Blitt explained his thought process in a Q&A: "Visual metaphors for America: well, you’ve got your Statue of Liberty, your Uncle Sam. Also, anything with stars and stripes on it. Babe Ruth, apple pie. And maybe, now, a fur-wearing QAnon shaman."
Very funny — let's hope the image of faux shaman at the riot only serves as a warning about the dangers of the loony fringe.
New York's  stark Jan. 18 cover shows three words that defined "3 Wednesdays in America" of an incredibly compressed news cycle. Each word starts with the letter "I" — Insurrection, Impeachment, Inauguration.
The cover story, titled "End-Times," is a collection of "dispatches from the violent final days of a grotesque presidency."
Time, The New Yorker and New York covers are eye-catching and serve as another reminder of the power of print.