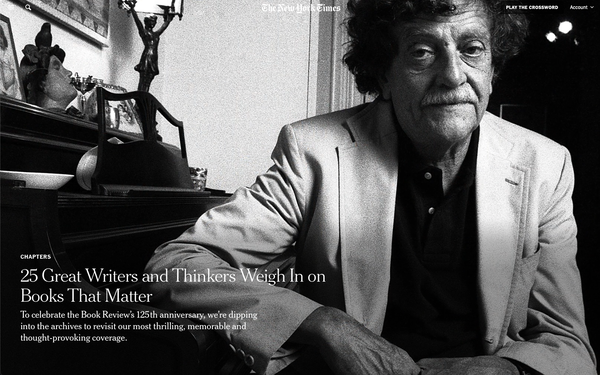 The New York Times this year is celebrating the 125th anniversary of its Book Review supplement by highlighting acclaimed writers who appeared in its pages. The year-long commemoration of The New York Times Book Review will feature a mix of archived articles and work from contemporary authors before culminating in a live event in October.

The NYT also plans to publish a special print section and a book by Tina Jordan, deputy editor of the Book Review, as part of the anniversary. The newspaper this week kicked off the celebration with a collection of reviews written by 25 authors, such as Vladimir Nabokov's savage critique of Jean-Paul Sartre's "Nauseau."

With Valentine's Day coming next month, the NYT will look at love stories over time, featuring an essay by literary critic Parul Sehgal that examines and reassesses the legacy of the newspaper's books section. Its past coverage will be highlighted throughout the year, and will includes snippets on social media apps, such as Instagram, Twitter and Facebook.

The anniversary celebration comes as the NYT's revenue shows signs of recovering from a slowdown in media spending during the pandemic.

Advertising revenue slumped 30% from the prior year to $79.2 million in the third quarter, a marked improvement from the 44% decline in the second quarter, according to parent company New York Times Co. Digital subscriptions have been a bright spot, surging 50% from a year earlier to 6.06 million by the end of September as homebound consumers spent more time on the internet.

Online readership of the NYT's books section jumped 45% last year, and global readership of reviews surged by 40%, a spokesperson for the newspaper told Publishers Daily. The book section's "10 Best Books of 2020" and "100 Notable Books" were its most-read stories of the year.

The Book Review started as a standalone supplement on Oct. 10, 1896, soon after Adolph S. Ochs bought the newspaper. The first issue was called the Saturday Review of Books and Art and featured news on the cover, including a story about Irish playwright Oscar Wilde’s time in prison and another about the threat department stores posed to independent booksellers.