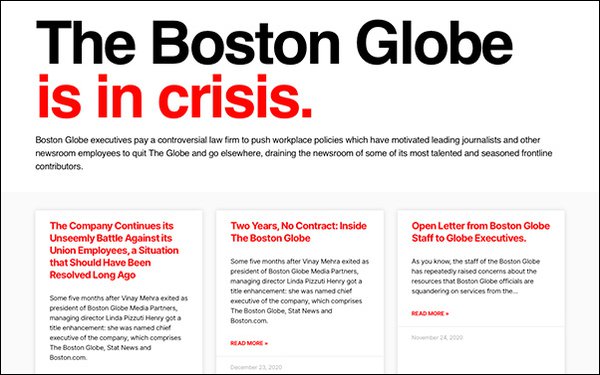 A union representing Boston Globeworkers this week started a campaign aimed at readers of the newspaper to highlight its frustrations with management amid ongoing contract talks. The "Dear Globe Readers" effort attacks management for hiring Jones Day, the law firm that represented the Trump campaign in its effort to overturn election results.

"As a law firm of choice for Donald Trump’s election campaigns, Jones Day has been widely denounced for its role in a lawsuit that sought to challenge the electoral integrity of the November 2020 U.S. election," the Boston Newspaper Guild said in a statement.
The "Dear Globe Readers" campaign is the latest salvo by the union, which represents more than 300 Globe workers, against management in the negotiations for a new labor contract. The last contract expired at the end of 2018.
The multimedia campaign includes mailings to Globe readers, a dedicated website and spots on cable channels such as CNN, MSNBC, ESPN and TNT.
“Ultimately, it is the readers who are hurt the most when Boston Globe executives and their Trump-affiliated law firm push policies that threaten to increase turnover among newsroom staff," Scott Steeves, president of the Boston Newspaper Guild, stated. "In order for us to bring readers breaking news and the best coverage, we need the Boston Globe to take a new approach to how it treats its workforce.”
Jones Day didn't respond to an emailed request for comment. The Boston Globe couldn't be reached for comment.