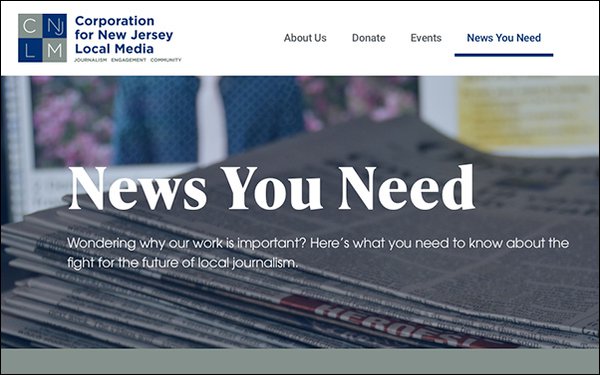 Fourteen weekly newspapers in New Jersey will convert to nonprofit status, thanks to a deal between the Corporation for New Jersey Local Media (CNJLM) and current owner, New Jersey Hills Media Group.

CNJLM has signed a letter of intent to convert the titles, some of which are 100 years old.

Hills Media weighed several offers, but chose to go with “a nonprofit organization dedicated to preserving and expanding the local news coverage we provide — in print, on the web and on social media,” states Liz Parker, co-publisher and executive editor.

CNJLM will launch a community fundraising drive on its website with a target of $500,000.

Liz and Steve Parker, whose family has owned the papers for 66 years, took over the titles from their parents over 25 years ago.

The Parkers will remain with the papers. So will their editors and reporters, some of whom have covered the communities for over 40 years.

“This conversion will ensure that they remain community-owned as they continue to provide quality community journalism, expand their coverage, serve as watchdogs on local government, and keep readers abreast of the news they need,” states Amanda Richardson, CNJLM executive director.

“Nonprofit newspapers as large as The Philadelphia Inquirer and as small as Montclair Local have demonstrated the benefits of a nonprofit model,” states Platt.