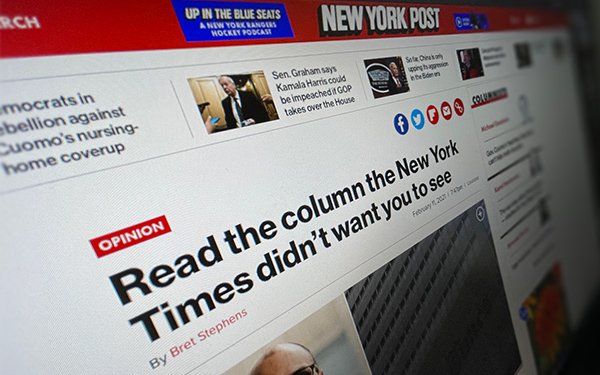 New York newsrooms are buzzing over the spiking of a column by New York Times columnist Bret Stephens about the departure of Times science reporter Donald G. McNeil Jr. over use of the “n” word.

Stephens’ column, which inferred hypocrisy on the part of the Times, was published last week in theNew York Postunder the headline: “Read the column The New York Times didn’t want you to see.” McNeil reportedly resigned after The Daily Beast alleged he had used the racial epithet on a trip to Peru with students.

In Stephens’ telling, McNeil was attempting to answer if a 12-year-old should have been suspended for using a racial slur.

“In a written apology to staff, McNeil explained what happened next: “To understand what was in the video, I asked if she had called someone else the slur or whether she was rapping or quoting a book title. In asking the question, I used the slur itself,” Stephens wrote.

Stephens continued that “editor-in-chief Dean Baquet noted that, after conducting an investigation, he was satisfied McNeil had not used the slur maliciously and that it was not a firing offense. In response, more than 150 Times staffers signed a protest letter. A few days later, Baquet and managing editor Joe Kahn reached a different decision.

“We do not tolerate racist language regardless of intent,” they wrote on Friday afternoon.”

That was where Stephens took issue with the Times.

“Do any of us want to live in a world, or work in a field, where intent is categorically ruled out as a mitigating factor? I hope not.”

Stephens also wrote: “No wonder The Times has never previously been shy about citing racial slurs in order to explain a point.” He cited repetitious use of the “n” word in a quote by Republican strategist Lee Atwater.

It is not known who leaked the spiked column to the Post, but the paper said it was not Stephens.

And, there were conflicting claims on who killed the Stephens column: Stephens reportedly said it was Publisher A.G. Sulzberger, but the Times reportedly told TheWrap it was opinion editor Kathleen Kingsbury.

TheWrap writes: “Stephens, like McNeil, did not acknowledge that McNeil was also accused of multiple other instances of making sexist and racist statements while chaperoning a group of students."

The publication reason speculated whether the NYP's publication of the column constituted copyright infringement or fair use. “Publishing leaks of others' documents is a common part of the Times' own business, in the name of ‘the public's right to know’; it would look hypocritical to complain about someone doing the same to the Times,” Eugene Volokh wrote.