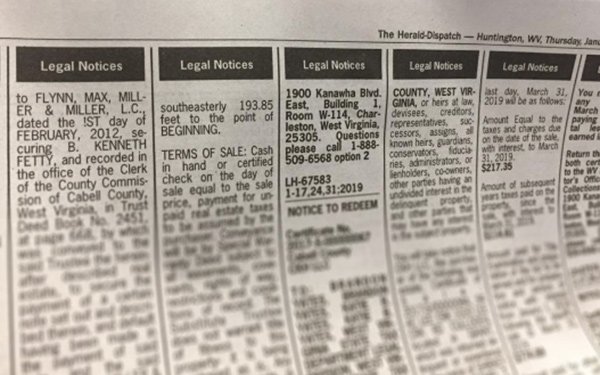 Newspapers argue that these bills would reduce transparency while hurting them financially.

Faced with declining revenues on all fronts, local newspapers are fighting legislative attempts to remove one more key source of cash: paid government notices. And they are using the one weapon they have: their own pages.

For instance, The Dispatch And Courier-Tribune has warned readers about two pending North Carolina House bills requiring that legal notices be posted on government websites and not in newspapers.

The lost revenue is important, “but the ability for the folks in the community to really know what is going on is more important,” says Justin Little, advertising manager for The Dispatch and Courier-Tribune in Asheboro, according to the paper.

The Logan Banner inWest Virginia has taken a similar view of efforts in that state.

“It’s an expense that can be done away with in the internet age with no harm done to the public’s ability to know what’s going on in their area, right?

“There’s also the fact that online notices can be buried in a user-unfriendly website,” it continues. “That would be a great place to hide important information.”

In Chicago, the African-American paper Crusader is calling on state legislators to defeat Illinois bill HB 811.

“The majority of the more than 400 newspapers in Illinois are small businesses,” the Crusader writes. “Like every other small business, newspapers have been hit hard by the pandemic. Removing public notices will make it even harder for newspapers to do what they do best — serve and inform their communities.”

Paid notices have long been a part of American publishing. In the 1800s, the U.S. Post Office placed ads to inform local residents that they had received mail — the only way they would learn of it in an age when there was no home delivery and most postage was paid by the recipient.

But states and locales are trying to eliminate laws that mandate paid placement in local newspapers.

The financial argument can be hard to counter. Yet the Logan Banner argues that counties assess a $25 publication fee when property owners pay back taxes or when the property is sold at auction.

“For example, Boone County reported that it paid $4,923 for paid notices during the 2018-19 budget year, but it collected $69,725 in publication fees,” the paper notes. “That works out to more than $14 received for every dollar spent.

In North Carolina, Davidson Country spent  “$76,708 from July 2017 through January 2021 on legal notices, not including notices for the Department of Social Services,” the Dispatch notes. That may seem like small change, but it can be critical revenue for small publications.

The issue becomes even more complicated as local newspapers are totally digitized and political rancor increases.

But there’s good news on one front.

The Wyoming House defeated Senate File 17, which would have allowed “cities, towns, counties and school districts to move their public notices — including meeting minutes, salaries and ordinances — from the pages of the local newspaper to those entities’ websites,” Rocket Miner reports.

One politician, Republican State Senator Bill Landen of Casper, Wyoming, said: “I’m not quite there with the notion that we pull the funding that makes sure that we get information out to our public,” Rocket Miner adds.
government, newspapers, revenue
Next story loading