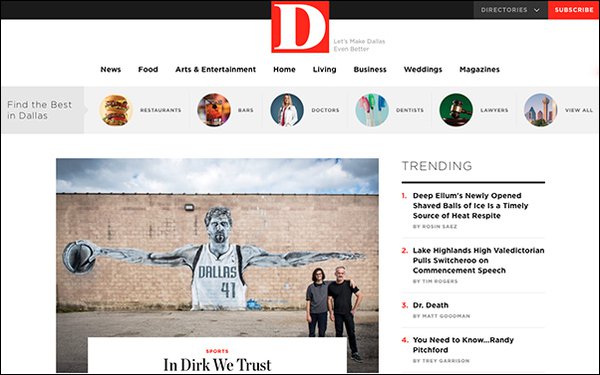 The courts are filled with lawsuits accusing publications of false reporting. Here’s a reversal: Allison Publications, LLC, publisher of D magazine, is suing an apparent reader for making untrue claims about it.

Reason, which broke the story, summed it up in a headline: “Man Bites Dog.”

The Dallas-based publisher filed the Jane Doe lawsuit on June 7 with the District Court of Denton County, Texas.

The complaint alleges that “an unknown person, sometimes identifying herself as Maya or Maya Pendleton,” made repeat calls to advertisers and others in business relationships and “made false allegations about Allison Publications and its advertising, journalism and business practices in an attempt to undermine those business relationships.”

Allison is seeking monetary relief between $200,000 and $1 million.

In most libel or defamation cases, the plaintiff has only to prove that the allegations against them are untrue. That’s hard enough, but at least there is an article — and it’s clear who wrote and published the malicious content.

In this case, Allison has the added burden of proving who committed the offense.

This complaint identifies a telephone number with an area code for the Queens and Brooklyn boroughs of New York City. A message left with that number by Publishers Daily had not been returned at deadline.

Jason P. Bloom, an attorney with the law firm of Haynes and Boone, representing Allison Publishing, could not comment on the particulars of the case. However, Bloom points out the action is not a libel suit, as stated in Reason, but a business disparagement case.

The case concerns oral statements, not written ones.

Reason notes the Allison complaint does not describe the substance of the alleged false content, as required by Texas law. First Amendment advocates might also question why a publisher would file a suit like this at a time when free speech is under attack from many quarters.

Also not clear is whether “Jane Doe” is a reader unhappy with an article, a political operative or a business competitor. Or, if this filing is one of a series or a one-off.

Brands have been pressured to pull their advertising from media based on their political views.