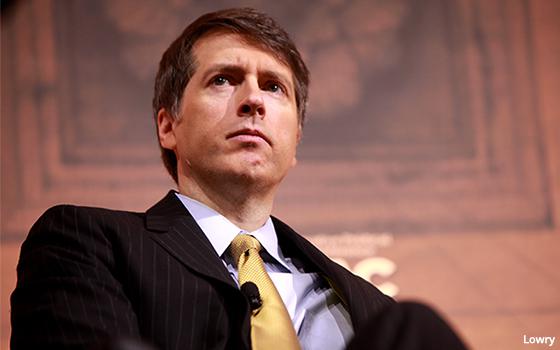 Conservative pundit Rich Lowry is stepping down from his role as editor of National Review’s print magazine to take on a more strategic role as editor-in-chief of the brand.

Veteran staffer Ramesh Ponnuru will replace Lowry as editor of the magazine.

Axios, which broke the story, reports that Lowry will work on building relationships in the conservative movement, while taking more speaking engagements and overseeing long-term strategic initiatives. He will also be responsible for overall editorial policy.

Like all periodicals, National Review is faced with a changing media landscape.

The title now has 110,000 subscribers, half of them digital, per Axios. Digital subscriptions have risen by about 30% over the last year.

National Review had an operating loss of almost $2 million a few years ago, but is now closer to breaking even, Lowry told Axios. Revenue is up 20% YoY, driven by gains in circulation, podcast and email.  In addition, the company has raised over $1 million in small donations from its readers over the past year.

Founded 65 years ago by the late William F. Buckley Jr., National Review ardently supported Ronald Reagan and is credited with helping to build conservatism into an electoral force in the U.S.

Where it goes from here is unclear.

Lowry told Axios he seeks to uphold Buckley’s standards “intellectually in terms of its integrity and courage."

National Review has taken issue with former President Donald Trump in several instances and is viewed as a more mainstream conservative periodical.

Ponnuru says he is "excited to be taking the helm of the magazine at a time when there are so many fundamental debates going on among conservatives,” Axios reports.