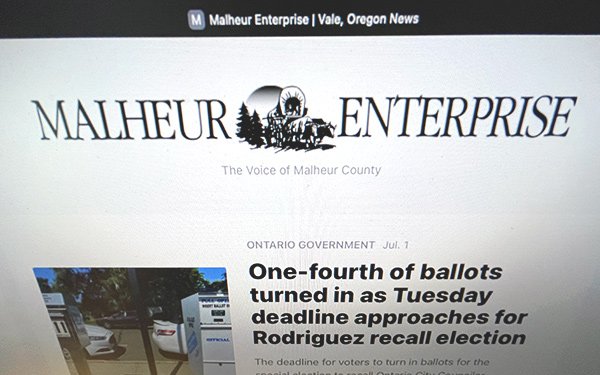 Big-city dailies aren’t the only publications suing to get access to public records. The Malheur Enterprise, a small paper in Malheur County Oregon, has filed suit, seeking to force the Ontario (Oregon) School Board to release documents pertaining to the alleged misconduct by two board members.

“The public has a right to know details about misconduct allegations that led the Ontario School Board to censure several board members for violating its nondiscrimination policy,” said Ellen Osoinach, the Oregon attorney for the Reporters Committee for the Freedom of the Press, which is representing the paper, according to a report on Oregon Live.

Here is the back story, as alleged by the lawsuit.

In March, a complaint was made by Superintendent Nikki Albisu, alleging misconduct directed toward her by Evans and Draper.

Liliana Frankel, a reporter for the Enterprise, submitted a request for records of any complaints made against board members in the past year on April 8, the suit alleges. The board rejected this on April 16, citing an exemption for internal advisory communications.

On April 20, during a public session, the board passed a motion to censure Evans and Draper for the alleged discriminatory behavior against Albisu.

Frankel made a second request on April 26, this time asking for communications between the board and Albisu. This was rejected on May 13 based on a personal privacy exemption and attorney-client privilege.

On May 25, the board passed a motion to censure Draper for purported conduct toward Ontario Middle School Principal Lisa Longoria.

Enterprise editor Les Zaitz then filed a request for investigation reports into the Albisu and Longoria complaints. This was also rejected on the basis of attorney-client privilege.

The lawsuit seeks production of the records within 10 days of an order by the court, and a waiver of fees for the inspection and copying of them.

The case is on file with the Circuit Court for the State of Oregon for the county of Malheur.
newspapers
Next story loading