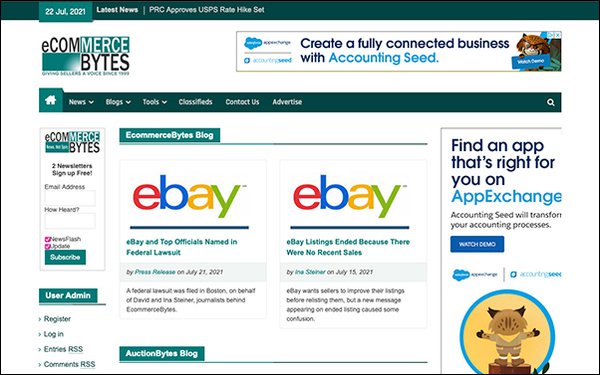 Journalists are increasingly being terrorized by governments. But two people say they were harassed for years by eBay employees for publishing content critical of the company in their email newsletter.

David and Ina Steiner, who run the newsletter EcommerceBytes, slapped the company and several former and current eBay employees with a lawsuit on Wednesday for allegedly pursuing a “coordinated effort to intimidate, threaten, torture, terrorize, stalk and silence the Steiners, and for misleading and tampering with the investigation.”

Also named as a defendant in the action is the company Progressive F.O.R.C.E Concepts, LLC.

Five individuals pled guilty to intimidation in Federal District Court, District of Massachusetts, and two other defendants have been indicted, the complaint states.

The Steiners filed the complaint against eBay and the alleged perpetrators of the cyberstalking in the same US District Court. Defendants include eBay itself, former eBay CEO Devin Wenig; former eBay Chief Communications Officer Steven Wymer; and Progressive F.O.R.C.E Concepts (PFC), a security firm that employed Philip Cooke as a contractor before he became a full-time eBay employee. Cooke also blamed the "drinking culture" of eBay that enabled his alcoholism.

The Steiners say they provide “factually based reporting on the inner-workings of various ecommerce companies, to keep subscribers and readership for their trade publication — many of whom are eBay sellers — up to date and informed.”

However, top eBay executives became “increasingly enraged by what they perceived as the Steiners’ negative coverage of eBay and the upper echelons of the corporation,” the complaint alleges.

In addition to online attacks, the Steiners were subjected to “threatening and disturbing package deliveries, which included live spiders, cockroaches, a bloody pig mask, a funeral wreath, and a book entitled ‘Grief Diaries: Surviving Loss of a Spouse’ sent directly to David Steiner,” the complaint states.

“The Steiners were terrified and feared for their lives,” it said.

Publishers Daily was unable to contact individual defendants, while eBay did not respond to a request for comment at press time.
legal, web sites
Next story loading