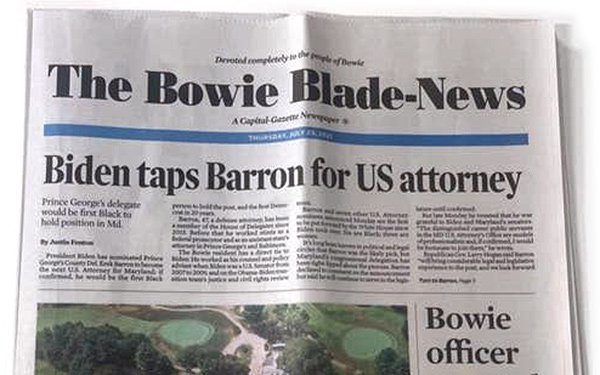 Alden Global Capital’s takeover of Tribune Publishing is affecting journalism in more ways than one.

The company is closing the Bowie Blade-News, a small, 41-year-old weekly based in Bowie, Maryland.

“Due to the changing habits of our readers and the shifting demands of our advertisers, The Bowie Blade-News will crease print publication effective immediately,” the paper said in a notice on Thursday, The New York Times reports.

In another move, Alden is cutting weekday print editions of the Chicago Tribune to three sections, down from four, Robert Feder writes. In fact, Alden ordered all Tribune newspapers to cut local and feature pages by 20%.

The Tribune claims that it will still have the same ad-edit ratio.

Of course, the crisis affecting journalism is about more than saving on print costs: Newsroom staffs are also shrinking, reducing the ability of the local press to report on issues facing their cities and the country.

The Bowie Blade-News announcement has a particular poignancy, given that readers are now being referred to The Capital Gazette sitefor local news. Five employees of that paper were mercilessly slaughtered in 2018. Jarrad W. Ramos, the man found criminally liable by a jury earlier this month, is expected to be sentenced to life imprisonment in September.

Former Gazette editor Rick Hutzell, who was himself on the gunman’s hit list, questions if the Gazette can survive in an article in Time this week. Hutzell is one of several employees who took a buyout after Alden came in.

“I wanted to stay,” Hutzell writes. “I believe in the work. Then I admitted to myself that a future of decreasing resources, fighting for every hire, cutting things deemed nonessential and working harder and longer to cover the ever-widening gaps was more than I could do after three draining years.”

But he asserts he had “faith that the value of a free press will survive the loss of a small-town newspaper editor, and even the presses themselves. It might not include print titles like The Capital and its weekly paper, the Maryland Gazette, which have no physical presence in Annapolis for the first time since before the Revolution.”

Instead, the future may be in “small digital publications for local news.”

That may well be true. Still, the closing of Bowie is being mourned by residents.

“Today marks the final edition of the Bowie Blade-News,” writes Una Cooper, communications manager for the city of Bowie. “I learned about the paper’s fate on June 24, just a few days before the third anniversary of the Capital Gazette shooting, and while the trial of the shooter was underway.”

Cooper adds, “The announcement was not unexpected, but I was profoundly saddened by the news and by the ongoing assault on community journalism.”
death of print, newspapers
Next story loading