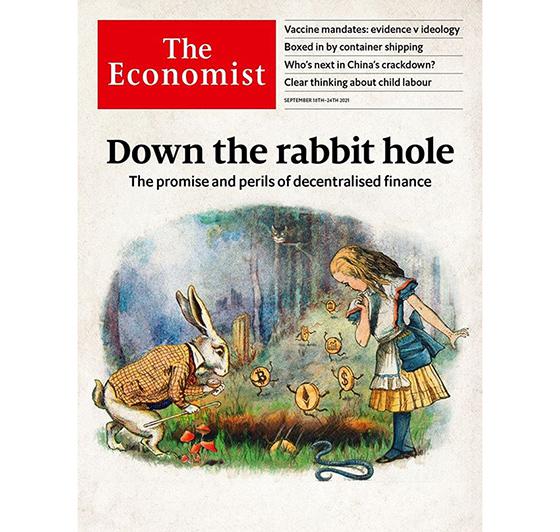 Proving the allure of non-fungible tokens (NFTs), The Economist reports this week’s auction of its “Down the Rabbit Hole” NFT had sold for 99.9 ether, worth roughly $422,000, after a flurry of late bids.

The winning bid in the auction, which took place on Monday and Tuesday, came from @9x9x9, the bidder’s alias.

The proceeds, less fees and potential taxes, will be donated to The Economist Educational Foundation (TEEF).

The NFT was of the magazine’s September 18 cover cover created by Justin Metz, a freelance artist based in Britain, working with The Economist’s cover designer Graeme James.

Time’s three versions of its iconic 1966 cover “Is God Dead?” sold for $435,000, according to Adweek. And it’s not only publishers auctioning NFTs: Fashion brand Dolce & Gabana sold a nine-piece collection of NRFTs for 1,885,719 ether, or nearly $5.7 million, TheNew York Times reports.

The Economist’s September story followed Alice (in Wunderland) “down the rabbit hole, into the weird world of non-fungible tokens (NFTs), cryptocurrencies and blockchains,” the magazine says.

Run independently from The Economist, TEEF empowers young people to join discussions about the news.