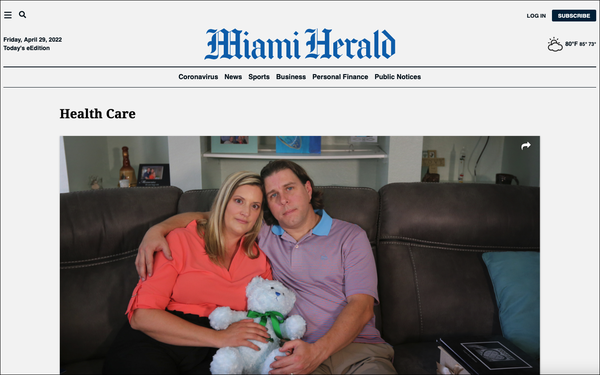 The Miami Herald and ProPublica were awarded the prestigious Collier Prize for State Government Accountability on April 30 for their joint five-part series on how a Florida program failed to aid families of children who suffered catastrophic brain injuries at birth.

The prize comes with a $25,000 award and is offered by the University of Florida College of Journalism and Communications. It was awarded at the White House Correspondents’ Association Dinner over the weekend.

There were more than 60 Collier Prize entries this year.

The winning series, “Birth & Betrayal,” investigated a Florida program created by the state legislature that sought to protect OB-GYNS from huge malpractice bills. But it also deprives families of their right to sue in the event of a birth gone wrong. It provides a one-time payment and promises to cover lifetime medical expenses. Some hard-pressed parents reported a bureaucratic nightmare. Days after the series was published, the Florida legislature unanimously passed a sweeping reform of the 33-year-old program, according to a press release from the university.

“The Miami Herald’s Carol Marbin Miller and Daniel Chang saw a flagrant injustice,” Herald Senior Editor for Investigations Casey Frank said in the release. “A Florida program created to aid families whose children suffered catastrophic brain injuries at birth was depriving those families of the most basic needs — from medicines to home health care — while hoarding in excess of $1.7 billion.”

The second-place award in the 2022 program went to the Charlotte Observer for a five-part series called “Death In the Fastlane.” The Observer investigated extreme speeding by drivers on North Carolina highways that claimed the lives of more than 1,800 people in the state over the past five years, playing an even bigger role in the highway carnage than alcohol. The investigation uncovered lax treatment of speeders by judges, repeat offenders and a lack of enforcement by police.

Third place was awarded to ProPublica for “Welfare States,” an investigative series that found that Southwestern states have, for years, been declining to spend billions in federal welfare funding meant to go to poor families.

The Collier Prize was founded by Nathan S. Collier, chair of The Collier Companies, headquartered in Gainesville, Florida. It’s purpose is to encourage coverage of state government, focusing on investigative and political reporting. Collier is a descendant of Peter Fenelon Collier, who in 1888 founded Collier’s, a weekly magazine focused on investigative journalism.