'Chicago Sun-Times' Said To Be Tearing Down Its Paywall 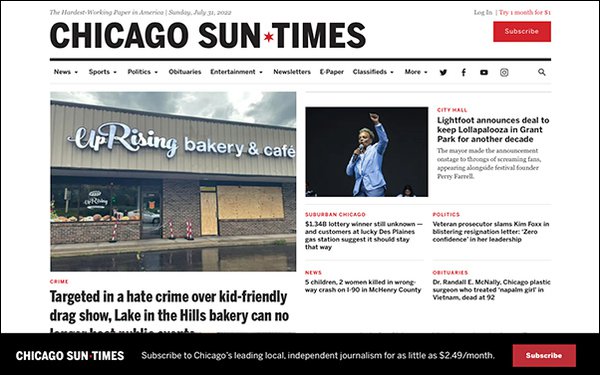 The Chicago Sun-Times, which instituted a paywall last December, is emerging from beyond that wall. The nonprofit plans to drop the paywall and launch a membership program, according to online reports.

This is a model widely used by nonprofits. It follows by several months the acquisition of the Sun-Times, a venerable Chicago news product, by Chicago Public Media, owner of WBEZ Chicago, Chicago’s NPR station, creating a partnership between the two brands.

The paywall was built on a metered plan, in which users would get 20 free pages views every 30 days and be charged for anything beyond that, The Wrap reported.

As one user wrote on Reddit, “At first you can start reading, but after about a minute there is a forced subscription screen which requires payment or login.”

But WBEZ reported at the time of the acquisition that the paywall would be softened so that consumers who are unable or unwilling to pay will not have content blocked. Yet, it also said that the Sun-Times would also seek subscription support from consumers.

How both of these ends would be achieved is still not clear.

The Sun-Times, which featured such writers as Roger Ebert and Irv Kubcinet and once had Mike Rokyo on page 3. has joined a growing number of publications that operate as nonprofits. This is in contrast to that other Chicago daily, The Chicago Tribune, which was acquired last year along with numerous other papers in the Tribune company, by Alden Global Capital, a firm known for aggressive cost-cutting.

The Sun-Times was once owned by Rupert Murdoch.

funding, non profit, publishing
1 comment about "'Chicago Sun-Times' Said To Be Tearing Down Its Paywall".
Check to receive email when comments are posted.
Next story loading