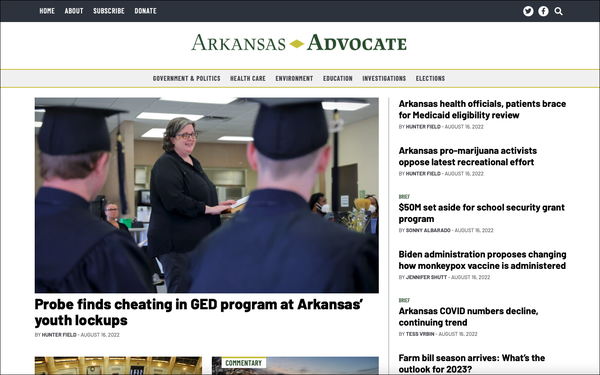 A nonprofit funded by the contributions of readers and philanthropists, States Newsroom, announced plans last year to have independent local newsrooms in roughly 40 states. As part of this, it is set to expand to Kentucky and South Dakota. The Arkansas Advocate is its 29th newsroom.

The organization also provides News from the States, a source for statehouse news nationwide, and has content-sharing partnerships with eight nonprofit outlets, including the Texas Tribune, to include their content.

Serving as editor in chief of the new Arkansas newsroom is Sonny Albarado, who recently retired as projects editor at the Arkansas Democrat-Gazette after over 12 years. Albarado has also served as a business editor, city editor, environmental reporter and government reporter at newspapers in Arkansas, Tennessee and Louisiana.

Also working in the Advocate newsroom are:

Tess Vrbin, reporter—Previously a reporter with the Advocate from the Arkansas Democrat-Gazette, covering low-income housing and tenants’ rights. Prior to that, Vrbin covered local government for the Commercial Dispatch in Mississippi and state government for the Columbia Daily Tribune in Missouri.