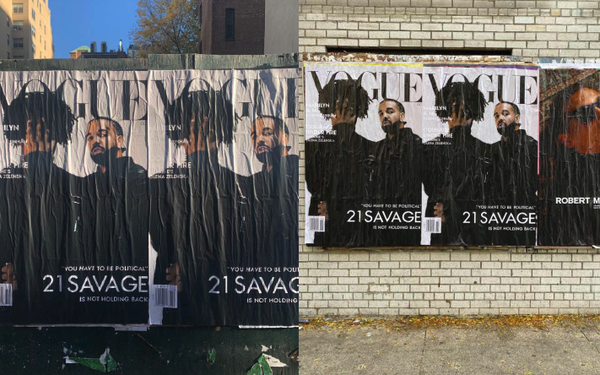 Condé  Nast parent Advance Magazine Publishers has filed a lawsuit, charging that musical stars Drake and 21 Savage are running a promotional campaign that falsely states the two artists will be featured on the cover of Vogue’s next issue to promote their album “Her Loss.”

The suit claims the stars have created a counterfeit issue of Vogue magazine, and are distributing copies in North America’s largest cities, while “plastering posters of the counterfeit cover along streets and buildings.”

In addition, Condé Nast alleges, the false claims are also being circulated in social media, and include this statement: “Me and my brother on newsstands tomorrow!! Thanks @voguemagazine and Anna Wintour for the love and support on this historic moment. Her Loss Nov 4th.”

“Vogue magazine and its Editor-in-Chief Anna Wintour have had no involvement in Her Loss or its promotion, and have not endorsed it in any way,” states the complaint on file with the U.S. District Court for the Southern District of New York.

The complaint continues, “Nor did Condé Nast authorize, much less support, the creation and widespread dissemination of a counterfeit issue of Vogue, or a counterfeit version of perhaps one of the most carefully curated covers in all of the publication business in service of promoting Defendants’ new album.”

Condé  Nast is asking the court to block the use of the Vogue mark, Wintour’s name or likeness, and turning over all of the allegedly counterfeit issues.

It also asks for statutory damages of up to $4 million, along with treble defendants’ profits.