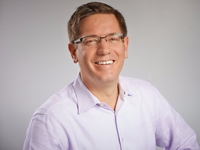 Having joined the Criteo leadership team in 2013 as CRO and then promoted to President and COO, Eric has been instrumental in transforming Criteo into a multibillion dollar Nasdaq listed company. Eric was again promoted in 2016 to the role of CEO. Previously, Eric served as COO at Living Social and Rosetta Stone and as Senior Engagement Manager at McKinsey and Co. He holds a Master's degree in Management from Kellogg Graduate School of Management and one in Computer Engineering from Swiss Federal Institute of Technology.