A Quarter Of Large U.S. Newspapers Laid Off Staff In 2018 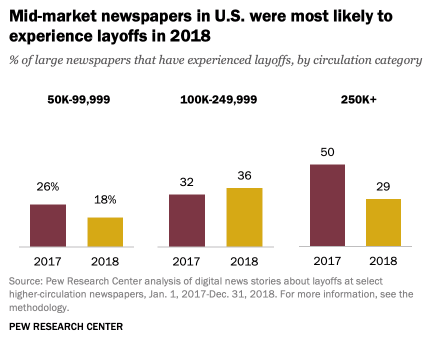 About one-in-four U.S. newspapers with an average Sunday circulation of 50,000 or higher (27%) experienced one or more publicly reported layoffs in 2018, according to the study, which examined news articles that cited staff layoffs at these outlets. This is slightly lower than the 32% of newspapers in this circulation range in 2017.

The specific papers with 50,000 or more Sunday circulation can vary year to year, but the vast majority (85%) fell into this category in both years included in this analysis. Of these, 9% had layoffs in 2017 and 2018. In other words, the papers that experienced staff losses in 2018 were for the most part different from those that did in 2017, widening the span of outlets with depleted staff.