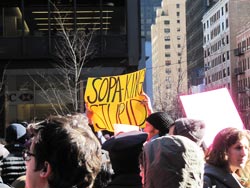 Faced with a groundswell of protests, several high-profile lawmakers withdrew their support for controversial anti-piracy legislation on Wednesday.

In the Senate, at least four co-sponsors of the Protect-IP Act said they were no longer backing the bill in its current form. Meanwhile, Rep. House Speaker John Boehner (R-Ohio) indicated on Wednesday that the companion Stop Online Piracy Act should not move forward until lawmakers reach more of a consensus on the measure.

The news came on a day when thousands of Web companies, big and small, staged various online protests. Some of the largest sites -- including Wikipedia and Reddit -- went dark, while numerous others took steps to call attention to the legislation.

Google, for one, blacked out its logo and asked users to sign an online petition opposing the bills. Craigslist greeted users with the message: “Imagine a world without craigslist, Wikipedia, Google, [your favorite sites here]... News Corp., RIAA, MPAA, Nike, Sony, Comcast, VISA & others want to make that world your reality.”

The bills target “rogue” Web sites that are dedicated to infringement. The bills provide for court orders banning search engines from returning links to such sites. The laws also have empowered courts to issue orders prohibiting credit card companies and ad networks from doing business with piracy sites. The measures originally contained provisions requiring Internet service providers to block domains of rogue sites, but those provisions appear likely to be dropped.

Facebook CEO Mark Zuckerberg also took his first public stand on the bills on Wednesday with a post outlining his opposition to the measures. “We can't let poorly thought out laws get in the way of the Internet's development,” he wrote on Facebook. He added that the company opposes SOPA and Protect IP, and that it will “continue to oppose any laws that will hurt the Internet.”

Offline, protesters in New York and other cities staged demonstrations against the bills. In New York, several hundred people rallied outside the midtown offices of Democratic Sens. Chuck Schumer and Kirsten Gillibrand, both of whom are on record as supporting the bill. Many held signs with slogans reading “Protect Internet Protocol,” “Stop SOPA,” and “Stop PIPA.”

The protests had an impact on Capitol Hill, where several lawmakers denounced the bills. Sen. Roy Blunt (R-Mo.) said on Facebook that he was withdrawing his co-sponsorship of the “deeply flawed” bill. Sen. Marco Rubio (R-Fla.), also a co-sponsor, likewise withdrew his support for the measure.

Sen. Orrin Hatch (R-Utah), another co-sponsor of the bill, said the measure “is simply not ready for prime time,” according to The Hill. He added that he intends to vote against moving the bill forward and to remove his co-sponsorship.

Sen. John Boozman (R-Ark.) said the feedback from his constituents “has been overwhelmingly in opposition,” and that he is therefore withdrawing support for the bill.

Sen. John Cornyn (R-Texas) posted on Facebook that the bill needs more work. “Better to get this done right rather than fast and wrong. Stealing content is theft, plain and simple, but concerns about unintended damage to the internet and innovation in the tech sector require a more thoughtful balance, which will take more time,” he wrote.

SOPA and Protect IP are aimed at stemming piracy by offshore companies, but critics say that the provisions in the bills could have a devastating impact on U.S. tech companies. Opponents say that the legislation won't curb piracy and poses significant threats to free speech. Critics point to language in the bills that appear to impose new obligations on Web site operators to police their sites for material uploaded by users. Opponents say that such policing requirements would make it difficult for companies to host user-created material. Critics also say that even the portions of the bills that affect offshore sites could still have an impact on the U.S. by restricting people's rights to access those sites.