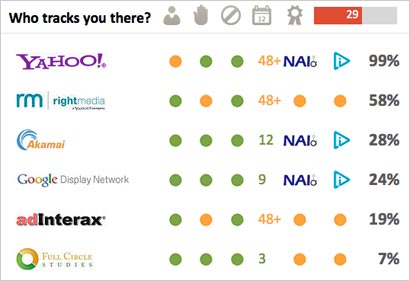 Privacy Choice is unveiling a new tool today that grades sites numerically based on how they handle data about Web users.

Sites like Google, Facebook and Amazon earn points if their own policies state they don't share users' names, phone numbers or other so-called "personal information," or if their policies allow users to delete their information. Sites also earn points if the tracking companies they work with follow self-regulatory guidelines, which generally state that users should be able to opt out of receiving targeted ads.

At launch, the tool monitored nearly 1,394 sites and 593 trackers. Overall, the sites' average score was 71. Shopping sites averaged a 65 score, while travel sites scored slightly higher, with an average of 80.

The dictionary site Merriam-Webster.com had the most trackers on the page -- an average of more than 15. But that site's overall privacy score was a higher-than-average 84. Among other reasons for the high score, the site allows users to delete information about themselves.

Facebook ranked an impressive 94, but that number was boosted by the fact that only one tracking company -- Nielsen -- has a presence on the site. That company is only seen "on very few pages" of the social networking service, says Jim Brock, CEO and founder of Privacy Choice.

The company says that the tool will enable easy comparison of sites. "There's nothing simpler than a number," the company says in a statement. "When you think of privacy risk in terms of numbers, you can know instantly if there's cause for concern."

At the same time, however, the tool only examines a narrow range of metrics, which limits its usefulness, says Justin Brookman, director for consumer privacy at the Center for Democracy & Technology. Nonetheless, he says, the grading system could give Web companies an incentive to adopt good practices when it comes to online tracking.

"There's some value to it," he says, adding that the factors the tool examines are worthwhile, although somewhat limited.

Separately, the compliance group TRUSTe also unveiled a new initiative today -- a consumer confidence report that examines people's attitudes toward privacy. The report revealed that 90% of online adults say they worry about privacy on the Web, 41% of online adults don't trust most businesses with personal information online, and 88% say they don't do business with companies that don't protect privacy.

The results are based on a Harris Interactive survey of 2,415 adults conducted last month.