Since mid-February, the percentage of major retailers that have used their email programs to promote their activity on Pinterest has grown from nothing to 24%, as of Apr. 18. The speedy integration of Pinterest into retailers’ email efforts is more evidence of the social network’s phenomenal growth. In fact, Pinterest links have appeared in retailers’ emails much more quickly than links to Facebook, Twitter, Google + or iPhone apps did, a sign that retailer adoption is likely to be very high. 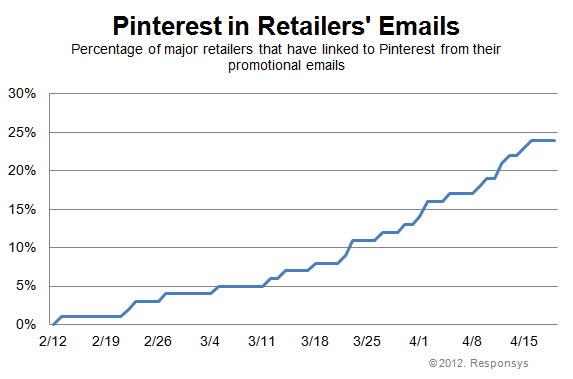 That said, it seems unlikely that Pinterest will reach the near-universal adoption that Facebook and Twitter currently enjoy. But Pinterest seems destined to overtake YouTube as the No. 3 social network promoted in retailers’ emails over the next couple of weeks. When we last looked at social media links in the promotional emails of major retailers last summer, our research found that 88% of retailers included Facebook links, 74% Twitter links, and 26% YouTube links.

Adoption has been spurred by evidence that Pinterest users are highly inclined to purchase items that they find on the social network. For instance, a survey by PriceGrabber found that 21% of respondents have purchased items that they found on someone’s Pinboard.

Considering that Pinterest emulates window shopping at the most dynamic mall ever, it’s no surprise that retailers are finding success there. And with the failure of f-commerce to take off, Pinterest may very well deliver the direct contribution to sales that retailers hoped Facebook would deliver.

While cooking, fashion, home décor and DIY are among the most popular topics on Pinterest, the retailers that have jumped on the Pinterest bandwagon thus far have been diverse, including retailers of apparel (i.e., Coldwater Creek), home furnishings (Williams-Sonoma), electronics (Sony), jewelry (Ross-Simons), toys (Toys ‘R’ Us), home improvement (Lowe’s), and other categories.

As with other social networks, retailers are largely focused on promoting their Pinterest pages in their emails rather than promoting ‘Pin it’ sharing links, which are likely to be much more effective on product pages than in promotional emails. The most promising synergies will likely come from retailers spurring pinning through contests, having celebrities and guests create pinboards of select products, and by leveraging Pinterest activity back into their email, print and other marketing campaigns.