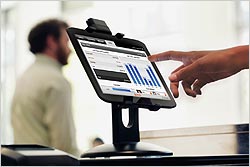 (Chase made an undisclosed investment in GoPago earlier this year.)

The GoPago tablets come with proprietary software that automatically syncs with existing POS systems and provides business and sales analytics, along with the 4G capability courtesy of Verizon Wireless.

When it comes to transactional costs, GoPago Live is charging a fixed 2.85%, which is slightly higher than the rate charged by other mobile payment systems, like Square Register (2.75%) and PayPal Here (2.7%).

Square and PayPal are not giving out iPads or Android tablets with their payment apps or attachments for accepting credit cards. Neither is NCR Corp., the cash register and ATM machine maker that last month introduced its own cloud-based POS system for small businesses. The full hardware package for NCR Silver sells for $619, not including the iPad. And users pay $79 a month to connect a mobile device.

GoPago last year launched a consumer-facing mobile app allowing users to pay ahead and skip the lines at participating local businesses. After an order is routed into a business' system, a customer receives a notification showing the wait time before they can hold up a digital receipt to pick up their purchase.

The GoPago app for iOS and Android is now integrated with the new Live service for merchants.

The company says more than 100 local merchants signed up for the product in San Francisco, where it kicked off the national rollout of its consumer app earlier this year. The company is clearly counting on its offering of free gear and services to provide an edge over competitors, noting that traditional POS systems can cost $10,000 in hardware and software, while other tablet-based systems can cost $400 to $619.

Its announcement also includes a testimonial from the owner of San Francisco hot dog joint Lucky Dogs, saying he switched to GoPago after using a different tablet system that cost $700 without the iPad.

But why did GoPago go with Android tablets instead of the iPad, given that the Apple tablet claims more than two-thirds of the tablet market? That's a result of the partnership with Verizon, which has long supported the Google mobile platform and has an arrangement with GoPago to provide the devices to merchants. The carrier's 4G service is now available throughout much of the country, but not everywhere.

For that reason, GoPago suggests businesses check out Verizon's 4G LTE coverage map to make sure they're in one of the 330 U.S. cities where it's up and running.