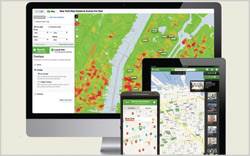 The growing consumer shift from PCs to mobile devices has impacted a host of Internet businesses -- from Facebook to Pandora to LinkedIn. Companies in the online real estate industry are no different. Trulia's filing for a $75 million IPO Friday underscores the increasing role that mobile is playing in the company's business.

Brokers and home buyers alike are turning to mobile to navigate the housing marketplace.

Trulia's S-1 filing notes that the company has seen its mobile audience nearly triple in the first six months of 2012 to 4.4 million from 1.6 million unique visitors in the year-earlier period. “We plan to expand our mobile products to support our rapidly growing mobile user base,” it states.

Trulia Mobile Ads, which are sold on a subscription basis, allow real estate brokers to buy local advertising on its mobile applications and mobile Web site by ZIP code or city and by share of a given market. The ads feature their profile and contact information on search results and listings, with the aim of increasing their visibility to in-market buyers.

Trulia doesn't break out mobile revenue, but describes itself as one of the few companies already monetizing at a higher rate in mobile than on the Web.

That sounds like Trulia trying to distance itself from companies like Facebook, which in its own IPO document admitted it had not begun to meaningfully monetize its mobile audience of 500 million. The admission triggered investor worries about its revenue growth that have since contributed to Facebook's plummeting stock price.

Still, investors will likely want to see Trulia demonstrate the success of its nascent mobile ad offering over a longer period -- especially considering that the company isn't even profitable. Its net loss for the six months ended June 30 widened to $7.6 million from $2.6 million a year ago. Revenue grew 78% to nearly $29 million. What's more, Trulia's sales and marketing expenses more than doubled to $15.2 million in the first half of the year, in part because of a $1.4 million increase in marketing and ad expenses as it beefed up marketing for Trulia Mobile Ads.

While touting its mobile growth and monetization, Trulia also points to uncertainties associated with this emerging medium in the IPO filing's risk factors section. It concedes that it only has a few months' results from its new mobile ads and warns that real estate professionals and advertisers may pull back on mobile ad spending.

Despite the risks, Trulia is gearing up in mobile to compete with larger competitors on the front, including Zillow.com and Realtor.com. Zillow, for instance, disclosed in its latest quarterly report that it had 33.5 million average monthly visitors to its mobile site and apps as of June 30, up from 20.8 million a year ago: a 60% gain. It also attributed its 75% revenue growth in the second quarter to $28 million partly to its surging mobile traffic.

A Borrell Associates report released this week projected that a growing share of ad dollars in the sector will flow toward emerging areas like social media and mobile. It forecast online real estate ad revenue overall to increase 15% this year to $13 billion, making it the largest segment, ahead of automotive.

But Borrell projects online real estate advertising will climb only 11% over the next five years to $14.5 billion, reasoning that the biggest boom has already taken place. If correct, that should make the scramble to make money from mobile among the real estate sites all the more intense in the next few years.

This story originally appeared in OnlineMediaDaily on August 17.