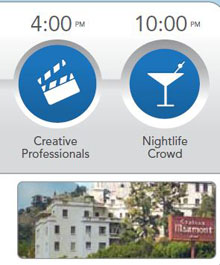 As initially reported in MoBlog on November 2, Context just isn’t what it used to be. Remember when the term referred to content adjacencies? With mobile media, context is now a complex formula involving the intersection of place and time. As Boston-based ad network Jumptap highlights in its latest MobileSTAT metrics report, hyperlocal targeting has to account for time of day -- even time of year -- to get the most bang for the buck.

As one would expect, tablets are mainly a nighttime thing. Using traffic across its large network of publishers and mobile ads served each month, Jumptap finds that all mobile platform use spikes in the evening, but mobile phones are used at about 9% above the hourly average during the noon to 4:00 p.m. period and 16% above average use between 4:00 and 8:00. Tablets -- which trend below average hourly use during the day -- start scaling quickly, so that between 8:00 p.m. and midnight, we see them used at 87% higher rates than the hourly average for the day.

But even on a more micro geotargeted level, hitting different dayparts in the same place will tend to render diverse audiences. In an analysis of ads served into the Hotel Chateau Marmont in Los Angeles, for instance, PlaceIQ research cited by Jumptap found that ads sent in the morning hours were really hitting workers at the hotel, but only grabbed tourists after 10:00 a.m. Noon, of course, netted the lunch crowd, but the late afternoon hours captured the creative professionals.

The metrics underscore an increased interest in location profiling that we are seeing from companies like Placed and PlaceIQ. In fact, in emphasizing the time+place equation in targeting  Jumptap’s MobileSTAT study this month appears to be underscoring the partnership the two companies struck earlier this year to provide richer data-driven targeting. PlaceIQ uses time of day, among other things, to profile a place and its likely occupants.

The effectiveness of an ad in driving traffic or business is closely tied to the relevance of the service to immediate need. While that is a no-brainer, the role of day of the week on performance is especially important in entertainment and dining segments. Jumptap finds that click-through rates (CTRs) for restaurant ads track well below average (up to -50%) at midweek, but escalate radically to close to 70% above average by Saturday night.

Ad performance appears to result at times from urgency and at others from simple opportunity. For instance, Jumptap says that based on 2011 holiday data, it expects to see some of the largest upticks in ad volume (content consumed) on Christmas Eve, Christmas Day and New Year’s Eve. But CTRs remain relatively average during those peak holiday moments and only begin to spike on New Year’s Eve (where there is a 12% lift against the average CTR) and skyrocket on New Year’s Day to a 37% lift. Why? Jumptap speculates that New Year's is a recovery and leisure time when people are in a better position to engage with and follow content leads.

This suggests the true complexity of targeting to mobile devices. Because mobility divorces the media platform from a narrow range of media consumption contexts (i.e., breakfast/commute newspaper reading, living room prime time, drive time, etc.) it forces the marketer to recalculate his understanding of audience across multiple new axes. Or, to reiterate our own new mantra here at Mobile Marketing Daily, now we are trying to understand, chase and target moods and modes.