Episode 605: The Flood -- Or, Family Guy Meets Planet Of The Apes 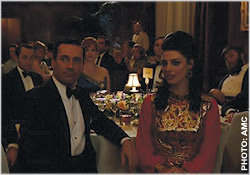 For all the complaints of the (eroding?) viewership of “Mad Men” this season, “The Flood” was a rock-solid, satisfying episode. It seems the series has found its footing again, as a national tragedy spurs a flood of emotions, epiphanies, and even a few acid jokes.

The shock of history sure amps up the drama. It opens on the evening of April 4, 1968, the night of the assassination of Dr. Martin Luther King in Memphis. As we’ve seen again and again, (most recently with the chaos of The Boston Marathon triggering memories of  9/11,) these terrible events evoke a desperate fear and yearning in people to get to their loved ones and hold them tight.

The assassination is key: against it, the ad business is trivial and our cast of characters come to focus on life's real meaning, the Biblical two-by-two thing that Papa Ginsberg preaches about: Peggy with Abe, Don with Bobby, and Pete with Trudy.

Still, this is “Mad Men,” and there is never one answer. The genius counterpoint for the Bible narrative (and, after all, MLK was a man of the cloth) was the inclusion of the movie “Planet of the Apes,” which takes the idea of evolution, and pure science, and turns it on its head. Venal humans have wrecked their planet and a race of apes has taken over and now treat the humans as long-suffering, filthy beasts.

But first, let’s tend to the tony awards dinner. The ANDY Awards scene brilliantly replicated that post-cocktails moment when men and women, preening in their formal evening wear, feel drunk and a little hollow, and grumble about their table placements, not knowing that their comfortable existences will be upended in seconds. 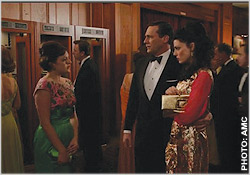 adhu Malhan, past executive director of the New York Ad Club, said the evening went exactly as shown: Paul Newman was in fact there to give a speech, and used the time to endorse Gene McCarthy for President over Bobby Kennedy (who would be assassinated that June).

Still, blanking out Paul Newman’s face and (unsuccessfully) faking the voice was a bit weird, helped only slightly by Joan’s joke about needing binoculars.

As New Blue Eyes was ending his speech, someone in the audience shouted out a question, asking if he’d heard that Dr. King had been shot. Newman hurried off the dais and out of the joint.

There was indeed a 20-minute break. Then the show actually went on, (“What else are we going to do?” as Don put it.)  The next day in The New York Times, ad columnist Phil Dougherty gave the death of MLK a one-line mention and devoted three entire columns to the evening’s winners. Really.

Race is still a painful issue in advertising today. Although there are more African-Americans on the account and managerial sides, there are still precious few in creative. 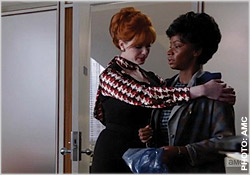 And while "Mad Men" is struggling mightily to open the story to black characters, (and we got restaurant cooks and a movie usher in this episode) they still come off as stiff and two-dimensional.  Peggy was able to give her colleague a warm hug, but the embarrassing moment between Dawn and Joan was a magnificent way to illustrate the gulf. We also saw the general guilt, wariness, and uneasiness of whites paying their condolences to black people in the aftermath, as if a family member had passed.

As a kid in the suburbs at the time, I remember my parents discussing the photos of a beaming Mayor Lindsay walking the streets of Harlem, keeping the peace in New York City throughout the night. I thought it was a heroic act until last night, when Henry mentioned that the handsome mayor mostly cared about the safety of the photographers, and previously had quietly made deals with neighborhood thugs to prevent looting and rioting.

Henry is a solid, mature guy, perhaps the only one in the cast. He has saved those kids by steadying Betty and offering them all a stable home. Betty knows it, and is trying to keep up her end. But his desire to run for higher office awakens all of her nascent needs to be beautiful and the center of attention. (I predict the diminution of the fat suit and the return of blonde Betty. How soon do you think?)

I loved the bit with Bobby tearing the blue and white wallpaper. I thought the poor kid probably had OCD  -- the lines did not match up! Lest we imagine that Betty has morphed into a nurturing person, she accuses her son of “destroying the house” -- while the country is falling apart at the seams.

Meanwhile, Don, is worrying about his inamorata, but the way he blushed in the lobby of his building when meeting them, I couldn’t tell whether the object of his lust was the doctor or his wife.

Before they leave the lobby, innocent Megan kisses the wife twice. Sylvia says, “When we come back Monday, it will all be a dream.” (A reference to “I have a dream?”) Will Sylvia be hurt or killed in DC? 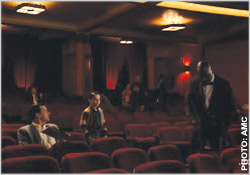 Don snaps out of that morbid reverie when Betty calls, insisting that although he forgot, he must pick up the kids. (Megan’s line, “She’s a piece of work,” was pitch-perfect.)

The next morning, when Bobby says he’s too sick to go to the vigil, (and how appropriate is it to take almost-five-year-old Gene to a vigil, anyway?) ghost dad Don offers him an aspirin. (“A temporary salve on a permanent wound,” as Pete put it once.

They end up at the movies, the absent father and grieving son, bonding over the wrecked planet of the future. (What are we leaving to our kids?)

Now that we finally have a permanent actor in the role of Bobby, Don is able to see that his son has feelings -- he cares about the usher -- and like Don, understands that “people go to the movies when they’re sad.”  He also says “Jesus” just like his dad.  And Don also knows what it feels like to be punished by Betty. And he has created another son with father yearning.

Don’s soliloquy about fatherhood is beautiful. At last, he can start processing some of his deep pain and admit to Megan the awful truth that (despite the picture-perfect photos in the carousel) he felt nothing at their births, just as he suspected his father felt nothing. Obviously, the idea of birth is a complete trauma for a kid whose Mom died delivering him. 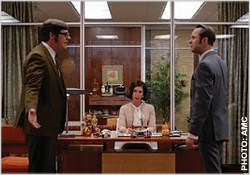 Meanwhile, Pete suddenly feels his loneliness, and connected to being a father as well. He has always had sensitivity to racism. But getting on his high horse with Harry, describing MLK as a “father with four children” seemed to me as hypocritical as Don was last week in attacking Megan for play-acting a kiss.

I must admit that I still kind of cringe whenever I see Ginsberg’s dad. I can’t fit him into history. The Jews with Yiddish accents who worked in the garment district and lived in tenements on the Lower East Side mostly came here in the early 1900s. He doesn’t seem like a Holocaust survivor, either. But I loved the scene with the Virgin Michael and his date in the diner. She seems terrific, and would be an encouraging addition to the show. (Oddly, she sounds just like Peggy.)

Abe’s character also strikes me as crazily histrionic and energetic, verging on a stereotype of a Jew. But his expectation of raising kids on the Upper West Side (they could probably buy an entire brownstone for that $28,500)  sure made Peggy see what’s important.

I loved the opening trademark shot of the back of the head. This time, however, it featured Peggy’s stiff ‘do, not Don’s. She surveys her domain the way the partners were shown last year canvassing their new office floor. The two-bedroom apartment, all white linen walls and shiny dark parquet floors, complete with terrace, in a 1960s white brick building on York and 84th, was the perfect female analogue to Don’s Upper East Side apartment, with his sunken living 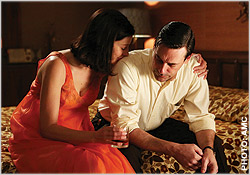 room and bar stools.(BTW, I think that Don’s open kitchen rarely existed at the time.

But anyone who has lived on the East Side had to roar at the agent’s outright lie about the coming of the Second Avenue subway. It is still not completed! But it is actually being built now, tearing up Second Avenue block by painful block.

Did the venal agent, who was using blood in the streets to get a better deal, actually doublecross Peggy? (Perhaps the co-op board would not have approved a woman?)

By losing that copy of Don’s terraced apartment, and getting Abe’s truth about where and how he wanted to live, Peggy actually dodged a bullet in more ways than one.

At the end of the episode, Don is on his terrace, a master of the universe -- and once again, existentially alone.

In 1968, in response to picketing and political problems, Y & R developed a “Give a Damn” campaign for the Urban Coalition. The wonderful, iconic advertising that resulted included this song.

mad men, tv
16 comments about "Episode 605: The Flood -- Or, Family Guy Meets Planet Of The Apes".
Check to receive email when comments are posted.
Read more comments >
Next story loading