Episode 609: The Better Half -- Or, He Climbed Her Because She Was There? 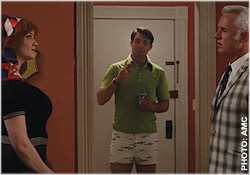 A killer episode that takes a stab at some of "Mad Men"’s major themes,  “The Better Half” answers one of the leading existential questions of our time: “Who wears short shorts?”

Forget the struggle! Turns out, Bob Bunson (his name according to Roger) wears short shorts!  And what a pair of stems! Rim shot!

No, really, the episode brings up the ever-lingering identity issues of duality, twinship, threesomes, and third wheels. There are lots of parallel stories among characters, all centering on questions like: Is there really a better half? And can we choose it?

Indeed, is being able to choose between two (fake, indestructible) margarines (Blue Bonnet is cheaper, Fleischmann’s more costly) a real choice? Isn’t the true choice between margarine and the real thing, butter?

Speaking of which, how about the thin- and blonde-again Betty? She’s back, and she’s buttah! Or is she margarine, Imperial Margarine, while wearing that buttercup yellow gown with the beaded Cleopatra collar at the fundraiser? (At least “Cleopatra” via the Elizabeth Taylor movie.) 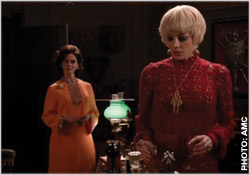 Written by Matt Weiner and Erin Levy, and brilliantly directed by Phil Abraham with the best acting I’ve ever seen January Jones do, the episode also returned to the theme of rejiggering identity through family. The agency family remains nameless while the big dogs, and ostensible daddies, Don and Ted, mark their territories; Roger gets rejected as a papa by his daughter and Joan; Don and Betty reunite briefly at camp to go mountain climbing; while Pete worries about his place at work and his mother.  “Paint me a new portrait,” he says to Duck. (Duck skeeves me out.) Joan tells Pete they have the same problems.  (Is everything a mirror image?) And in the end, Peggy stands alone.

Let’s start with Megan, who is suffering in her double role as twins on her soap opera. (Yes, we get Don’s dual-identity issue triple danger alert, but also more meta self–mocking  from Weiner, who is constantly criticized for turning the show into an old-fashioned soap:  “I can't be a sister and a mother. That's bad writing!” says Arlene, the sometime lesbian and would-be foursome maker.)

Megan's dual roles underline that usual split in Don’s desires: blonde/dark-haired, Marilyn or Jackie.   Her trouble with separating the two, femme fatale/maid, and defining each, is exactly the role she struggles with in real life. (As underscored by the AMC flashback scene from last season of the new Mrs. Draper in her underwear in her living room, on all fours, cleaning.)  “They’re two halves of the same person and they want the same thing but they’re trying to get it in different ways,” she tells Don over dinner. 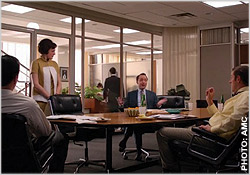 There was almost too much delicious stuff to analyze, so I’m going to stick to two scenes, each a masterpiece of sorts: Don and Betty at camp, and Bayonet Peg and the freshly gutted Abe.

As for the latter, I never really saw them as a pair. Hard worker Peggy never had the freedom that would allow her to break out like Abe. She sees the opportunity to rise as an executive at the agency as gloriously freeing.

The most literal equivalent of “bleeding-heart liberal” ever brought to the screen, Abe seems wild-eyed, wild-haired, and ridiculous. I remember when my cousin, newly long-haired and bearded, showed up to a family party in 1969, and told the middle-class elders there that in future he would line up people like them and shoot them. (Cuz is now a rich old guy, naturally.) 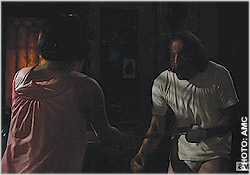 Back to Abe and Peggy and their recently purchased “shit-house.” (There's a lovely cut from Peggy’s war-zone apartment to Roger’s quiet, palatial bedroom.) First, Abe gets stabbed in the hand (a callback to Stan’s getting stabbed in the arm last week) walking home from the subway, and refuses to ID his attackers to the police. Abe has no such problem, however, when Peggy, like a sniper, bayonets his gastric system by mistake with her homemade pole and knife combo. (That’s some demented version of “Romeo and Juliet” here.)

In a city filled with sirens, Peggy gets in the ambulance with Abe, and takes part  in one of the best break-up/near-death scenes ever written. "Your activities are offensive to my every waking moment." Abe tells her, knife still in his chest, gurgling blood. "You'll always be the enemy."  “Are you breaking up with me?” Peggy wants to know.

Peggy is indestructible, however, like margarine, and she goes from her all-nighter in the hospital to the only place that feels like home. That’s what you want in your employees: a woman who can go straight from a stabbing to the office, without showering!

Earlier, Don had treated Peggy badly, like one of his wives, and told her she had to choose. When Ted hears that she’s now single, he heads back to his comfort zone: his desk, and working with the door closed.  Seems like you lose whether you choose or you don’t. 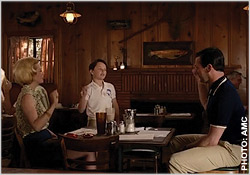 On the Betty front, she’s a femme fatale again. And sitting outside the bunkhouse/motel in shorts, she’s feeling young and frisky. The country air (or maybe it’s the booze that he alone was able to locate) has the same effect on Don.

As they reminisce, they return to Eden: Don mentions how they went “into the woods” to make Sally. Though bugs don’t like her, as she says, she starts “getting bit.” (By the love bug!) This is an interesting bit of uncharacteristic bad grammar and Don later joined her by saying, “if we lied here.” (Double meaning of “lied?”)

I didn’t expect her to keep her door open (!) but she does, and Don enters. The love scene is really interesting: they’re both so open. Don asks, “Why is sex the definition of being close to someone? “ and claims that for him it’s like “climbing a mountain.” When he reaches for Betty for the second time, she calls him on this. “You wanna just hold me?” she winks. Is “lying together” just as good?

Now seemingly much more mature, no longer jealous, Betty pulls a Don here: “That poor girl,” she says of Megan. “She doesn’t know that loving you is the worst way to get to you.” It’s true, and she’s beginning to sound like some of his other, knowing mistresses, like Dr. Faye and Rachel. 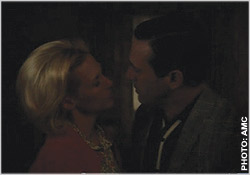 Did Don sneak back into his own room in the middle of the night? I wondered how Betty could take the chance of having him in her room in the pre-cell-phone days, with Henry arriving in the morning. Don finds them happy and united in their coffee shop booth. He gets a table for one, which perhaps makes him think about being a man without a home, and the importance of families and relationships.

He returns home to Megan, who looks like a little girl, make-up free, standing in her T-shirt and Carter’s undies on her terrace, vulnerable to the big city.  (Oddly, Abe wears the same outfit when he’s stabbed, minus the star on the T-shirt.)

Megan says “Something has to change!” -- and Don agrees. He comforts her, and says he missed her. (The same line he used on Betty.) But it’s more of a father comforting his daughter. Can he change? Does he love her?

The final song, “Always Something There to Remind Me,” is a brilliant pick. Joan has her son, Abe has his abdominal scars, Don has his kids, Peggy and Pete have their secret history.

It ends with Peggy, the monkey in the middle, standing between the doors of the offices of the now strangely allied Don and Ted. All doors seem to be closed to her for now.  But we’ve seen her in action with a bayonet. She is Mother Courage.

mad men, tv
28 comments about "Episode 609: The Better Half -- Or, He Climbed Her Because She Was There?".
Check to receive email when comments are posted.
Read more comments >
Next story loading