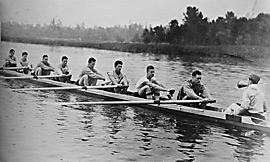 I’ve been reading Boys In the Boat – about the University of Washington’s 1936 eight-oar crew comprised of the sons of loggers, shipyard workers and farmers and their pursuit of Olympic gold – and among other things, it’s got me thinking about how important it is to be in sync with the rest of the team, and conversely, what a hindrance it is when someone is, as they say, not in the same boat. The author gives the reader a complete understanding of what it takes to win, all the strength involved in every stroke, every leg drive and every release, and how this has to be rapidly and in precisely the same manner as everyone else. Or else you lose. I related to that. It’s how I feel about media not being aboard the agency.

I never thought losing media was a good idea. We all know what it’s like to present a campaign that relies on 30-second commercials for emotional impact and other venues for various purposes, only to be informed that the media folks across the street didn’t recommend enough thirties to reach everyone. You’re sunk.

And you probably know what it’s like to lose an ad that you are certain will, in the right circumstances, strike a chord. It’s like you have this line for Charmin Ultra Soft Toilet Tissue that ends up only as an outdoor billboard, when, all along, you envisioned it running in public bathrooms, so a consumer could walk in, head to an available stall and read, “Make your trip as smooth and comfortable as possible.” You just know it will resonate. But, noooo, the media agency got a deal on highway space, where “Make your trip as smooth and comfortable as possible” sounds like an ad for Bridgestone tires.

Part of the difficulty is that when media agencies refer to the “idea” it’s an approach to placement, while ad agencies mean the communication itself and the combination of two elements. The only leader good enough to band together two groups that don’t speak the same language is, perhaps, Captain Kirk – and good luck with that. It’s a problem. And it’s only been compounded.

As the demographics in the country are changing and the minorities become the majority, we should be able to address the diversity of our target audience, and from the get-go, have everyone aligned about how this will be accomplished. Or what? Be like the republicans?

Currently, if we try reacting in real time to something that’s trending, we’ll most likely become mired in a Kafka-esque bureaucracy with the media folks (across the street) and miss the opportunity. Despite this being the age where everyone needs everything at their fingertips, we don’t always have everything at our fingertips.

But here’s the direst effect of all: The people in the boat strain to compensate for the empty seat. Imagine if creative people and planners didn’t feel burdened to be technology experts, geeked up on every new function and app? Given that the web is media, what if we had media folks to pull some weight? Because when art direction or copywriting or planning is done right, it takes all of our attention and devotion; it takes one continuous and unbroken cycle that involves the head, heart and muscle to be mastered. To not be able to do that is tragic.

I suppose it’s one of the consequences of management, especially holding company management, not asking themselves the important questions like, How do creative people come up with ideas? And, What is needed for us to win the race? They’re playing with economies of scale and consolidation and how to get more boat for their money, not with how we can benefit from media and creative pulling together.

Fundamentally, the more time creative people spend crafting the work, the more real the audience becomes, and the more real the audience becomes, the more able creative people are to see that person, in a particular place, getting a kick out of their work – they can actually hear the laugh, see the raised eyebrow, feel the gasp. The imagined response is motivating; to the creative person, it’s what success looks like. And when people are motivated, they create a better product.

In rowing, there’s a time when all eight oarsmen are rowing in such perfect unison that it feels like the boat is a part of each of them, moving as if on its own. It’s called “swing.” It’s the rowing equivalent of being in the zone. Apparently,  “the closer a crew can come to that ideal – maintaining a good swing while rowing at a high rate – the closer they are to rowing on another plane, the plane on which champions row.” But here, the coxswain’s head is spinning and the rowers are handicapped; and with little evidence the administrators ashore even know what is lacking, there’s not much chance of something like that happening.